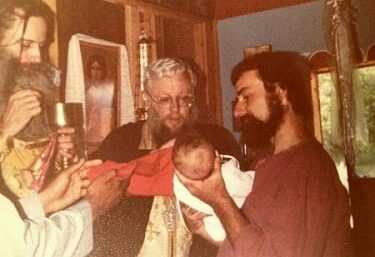 Father Alexis assists to Fr. Seraphim (Rose) at the communion of the infant. Photo credit: http://www.spc.rs/eng/fr_seraphim_was_whole_man_and_therefore_he_was_healed_man

An endorsement from the publisher.

The Orthodox Faith, brought to Russia in 988 A.D., changed the nation forever. Even half a century of repression by the Communist government could not obliterate its influence, and it is apparent that once again it has taken its rightful place as a significant factor in Russian life. Fr. Alexey Young has given us a concise history of the Russian Orthodox Church both within and outside of Russia. In reading it, one quickly becomes aware that the Church has made Russia indelibly Orthodox, and that Russia has made the Orthodox Church of Russia indelibly Russian.

Fr. Alexey’s history is more than a history of the particular jurisdiction, “The Russian Orthodox Church Outside of Russia.” He deals with the Churches in America that remained under the Russian Patriarch after the Revolution of 1917-18 in an evenhanded and fair manner. When Borgo Press asked me to edit a series of books on Orthodoxy in America, it was stressed that we were seeking objective histories free of polemical material. Fr. Alexey has given us just such a history. That he is proud of the jurisdiction to which he belongs comes through clearly, but it has not prejudiced him regarding the other Russian and non-Russian Orthodox Churches.

In dealing with the problems of his own Church, he remains objective. In his account of the Schism of 1986, he continues to be fair, although even writing about it must have been painful to him. Because of his forthrightness, it is easy for the reader to understand the issues, and to realize that they were not peculiar to the Russian Orthodox Church Outside of Russia, or even to churches, but were and are common problems that often affect other institutions.

From his deep and thorough understanding of the history of the Orthodox Church, Fr. Alexey helps us to better understand the situation in which the Church finds itself in America. He also attempts to help us look into its future. There are obviously two strong parties within the Russian Orthodox Church Outside of Russia: those who want to Americanize it, and those who want to preserve its Russian heritage intact. Unfortunately, this has been the history of almost every other church brought to America from overseas. In most cases, these churches succeeded only too well in becoming Americanized. In the struggle, many have forgotten that Christ intended the Church to be universal. He preached to Jews and Gentiles alike, and his apostles went out into the world to create a Church neither Jewish nor Greek. The Churches from Russia, Greece, Romania, Poland, etc., need to see themselves as part of the universal Church. It is a given that no Church can or ought to compromise truth. A Church which claims to be Orthodox can surely accept the need for it to be as Christ intended, both Orthodox and universal. This noted, we cannot but be impressed with the determination and the courage of those who worked to preserve the Russian Orthodox Church. Nor can we fail to see the deep piety of many of the laity and clergy who constituted a remnant determined to continue the Church which had nurtured their faith, and who wanted to preserve that faith for their children and for their children’s children. Fr. Alexey has drawn a clear and challenging picture of a Church in exile fighting for survival.

It is in this light that we must understand the attitude of the Russian Orthodox Church’s view of the Ecumenical Movement. They persevered against the Communist regime and they were not about to surrender any part of their faith to belong to an organization that would, in effect, require them to surrender their claim to be the only true Church. According to Archbishop Iakovos of the Greek Archdiocese of North and South America, there can be no dialogue with Roman Catholics and others “because ‘dialogue’ implies equality,” and Orthodoxy claims no other Church can be equal to it. As one who is neither a member of the Orthodox Church nor the Roman Catholic Church, I have not felt that when the Roman Catholic Church offers to engage in dialogue with anyone, it is conceding equality. I also speak with God, and most certainly do not consider myself equal with Him.

Another reason for the fear of ecumenism seems to be a fear that involvement with the Ecumenical Movement would mean to become a part of some group that “recognized” the Metropolia.

Finally, Fr. Alexey has given us a succinct history and, at the same time, a picture of his Church as it exists now, as well as a glimpse of how it plans to deal with present and future problems. Fr. Alexey has shown us a picture of a Church attempting to administer parishes in free America at the same time as it administers parishes in Soviet Russia, which until recently were conducted underground. A formidable administrative problem indeed! It is hoped that the Church, while attempting to deal with the problems it has on two continents, will not overlook addressing the problem it has in America—that of the loss of so many of the present generation. Fortunately, as this history makes quite clear, the losses are not due to any erosion of faith. To an objective reader, it seems apparent that much of the loss is due to the Church’s preoccupation with a history and a society that is foreign and of scant interest to many of the present generation living in America.

In his closing chapters, Fr. Alexey has clearly shown the problems within the Russian Orthodox Church Outside of Russia, as well as the concern of its leadership regarding these problems. This concern, along with the great piety of its members, may enable it to overcome present-day problems in order that its great faith may be passed down to ever-increasing numbers of succeeding generations.