A brief exposition of the history of Orthodoxy in America from 1907 and until 1934.

When Archbishop Tikhon returned to Russia in 1907, and subsequently became patriarch of Moscow and All Russia, he was succeeded in America, first by Archbishop Platon, and then, upon the outbreak of World War I, by Evdokim (Meshcherskii), who ruled with four suffragan bishops — Aleksandr of Canada, Philip of Alaska, Eftimios of Brooklyn, and Stefan of Pittsburgh. By now, the Church was growing rapidly; seventy-five more parishes were added to those organized during the time of Archbishop Tikhon. Many Uniate parishes (particularly, but not limited to, the Carpatho-Russians) left the Roman Catholic Church and returned to the Mother Church, and to Orthodoxy.

When Archbishop Evdokim went to Russia for the Great Sobor of 1917-18, his place in America was filled by Bishop Aleksandr (Nemolovskii). In the early 1920s, the American Church came under the jurisdiction of the Administration Abroad, which took an active administrative role in overseeing its American “branch” — particularly on disciplinary questions such as divorce and the establishment of a new See in Alaska.

Upon appointment from the Church Abroad, Metropolitan Platon, formerly of Odessa, succeeded Aleksandr in 1922, but, unbeknownst to ecclesiastical authorities in Karlovci, Platon was at the same time seeking official appointment directly from Patriarch Tikhon himself. When the Patriarch refused to interfere in the decision of the Church Abroad, saying he “did not wish to go over their heads,” [1] A History of the Russian Church Abroad…, op. cit., p. 72. Platon suddenly produced an ukaz, allegedly from Tikhon, appointing him sole and independent head of the Church in America. At first, the Synod in Serbia accepted this decree in good faith, suspecting nothing untoward, but early in 1924, an actual decree from the Patriarch in Moscow deposed Platon “for having engaged in public acts of counterrevolution directed against the Soviet government,” [2] Ibid., p. 75. and an American court of law subsequently ruled that Platon’s decree was, in fact, a forgery. To deal with this embarrassment, Platon convoked the Detroit Sobor in April of the same year, with the purpose of declaring the Russian Church in America “temporarily autonomous” — that is, free of both Moscow and Karlovci — until a future All-Russian sobor could sort things out. This “temporarily autonomous” jurisdiction, comprising approximately three hundred parishes and one seminary, called itself “The American Orthodox Church.”

Clearly, “just as elsewhere in the world, the Russian Revolution was both a crisis and a turning point for Orthodoxy. Anarchy entered Church life. Guidance and help were no longer to be expected from Russia. Schisms, as well as the difficult conditions of the emigration, weakened the position of the Russian Church Outside of Russia, which logically should have taken over all the Russian missions [in America and Europe]. As a consequence, the American Mission [under Moscow] as such simply ceased to function, and Church life thereafter came to be organized on national, jurisdictional lines. Under the given conditions, this sad turn of affairs was perhaps inevitable; the canons regarding missionary territories and overlapping jurisdictions of bishops simply could not be applied.” [3] Orthodox Word, (September/October 1968). It was not until 1960 that a pan-Orthodox attempt was finally made to address this question in North America. The attempt was, however, largely unsuccessful.

Thus, at a time when the Church Abroad was experiencing schismatic efforts from Metropolitan Evlogii in Western Europe, the same was now happening under Platon in America. At the Karlovci Sobor of 1926, Platon of America, who was present, was asked to disavow the “temporary autonomy” of the American Church and return to canonical unity with the Russian Church in Exile. When he refused, the Synod Abroad condemned the Detroit Sobor as “extremely dangerous and harmful for the interests of the Russian Church in America.” [4] A History of the Russian Church Abroad…, op. cit., p. 79. The imperious Platon responded with another American sobor in January 1927, which labeled the Russian Church Abroad “uncanonical.” Only one of his bishops dissented from this action, Bishop Apollinarii (Koshevoi), who proclaimed his loyalty to the Synod in Exile, and was therefore expelled from the ranks of the new “American Orthodox Church.”

As a young man, Bishop Apollinarii had studied at the great Kazan Theological Academy under the future Metropolitan Antonii, who also tonsured him into monastic life. Consecrated Bishop of Ryla by the future Metropolitan Platon in 1917, the Higher Church Administration Abroad put him in charge of the Russian Ecclesiastical Mission in Palestine (which had the care of numerous holy places). In 1924, Apollinarii was appointed vicar of the North American Diocese under Platon, serving as bishop of Winnipeg, Canada.

In the late spring of 1927, the Church Abroad deposed Platon and chose Apollinarii to lead what remained of the original Russian flock in America. The Church was in a state of desolation and chaos, with many parishes closed, and 90 percent of the Russians now “unchurched.” It was, at first, a difficult and lonely path, but until his death in 1933 (by which time he had gathered some sixty-two parishes), Apollinarii waged his crusade against Platon’s schism. His quiet witness was without dramatic polemics, while his simplicity and “unassuming cordiality,” as well as his “remarkable tolerance and patience,” and the “advanced theological erudition” of his mind, attracted many clergy and laity to him. [5] Orthodox Life, (September/October 1975). Slowly, various priests and, sometimes, whole parishes, left the schism and returned, through Apollinarii, to oneness with the Church Abroad. In 1929, the Synod Abroad gave Apollinarii the rank of archbishop “for extraordinary labors and the patient endurance of moral trials in the stand for canonical truth.” [6] Ibid. In this same year, Karlovci also consecrated vicar-bishops for him: Tikhon (Troitskii) for San Francisco, Joasaph (Skorodumoff) for Montreal, Theodosius (Samoilovich) for Detroit (who later became the Synod Bishop of Brazil).

When, in 1929, Platon announced that he would make peace with the Church Abroad as long as he, and not Apollinarii, could be Metropolitan of All America and Canada, the Russian Synod in Yugoslavia declined to accept his terms. There now ensued numerous court cases instigated by Platon to seize parishes and properties loyal to Apollinarii, but most of these failed. Things became still more complicated in 1933, when Metropolitan Sergii in Moscow pronounced the “temporary autonomy” of Platon’s group “null, void and schismatic”; he suspended Platon, who was now not recognized by any Orthodox jurisdiction. The following year, Platon died and was succeeded by Theophilus (Pashkovskii) as metropolitan. Almost immediately he, too, was suspended by Moscow.

At this point, the Russian Church Outside Russia hoped there could be a meaningful reconciliation with the Metropolia (which Platon and Theophilus’s group had come to be called). To this end, Archimandrite Vitalii (Maximenko) was consecrated in Belgrade as Bishop of Detroit and sent to “establish peace and Church unity in America.” [7] A History of the Russian Church Abroad…, op. cit., p. 86. Vitalii was another of Metropolitan Antonii’s spiritual children, having been tonsured a monk by him in 1899. From 1902 to 1914, he had been in charge of the printing activities at the great Pochaev Monastery, supervising some one hundred and fifty other monks in this work. “He slept little, often right at the printing press, somewhere underneath the machine… [They] printed service books, textbooks, books and exhortations for the people, and missionary works, and issued five periodicals. These publications were popular throughout the whole of Russia.” [8] Orthodox Word, (May/June 1965). During the Revolution, he was imprisoned by the Bolsheviks and later condemned to death by Polish Catholics. Finally, he escaped to Serbia, and later established a monastery and printing works in Czechoslovakia.

After much travel and careful study of the Church situation in America, Bishop Vitalii reported that the reason for the American division in the Church was “Russian stupidity,” and he called for the restoration of “unity, organization, and discipline.” [9] A History of the Russian Church Abroad…, op. cit., p. 87-88. It was largely through his efforts that, in 1934, as a goodwill gesture, the Synod Abroad lifted its ban against the Metropolia. The new Serbian Patriarch, Varnava, added his peace-making voice by inviting all concerned prelates to iron out their differences at a new Karlovci sober, to be held in 1935. At this important meeting, a workable agreement was reached by all the participating hierarchs, which included Theophilus, as well as bishops from the Church Abroad. In fact, Theophilus told his flock back home that “the position of the Russian Orthodox Church Abroad has been strengthened by the unity and peace which have been obtained. Now we have one center of Church administration in the Bishops’ Synod in… Karlovci, where the American Metropolitan district [the Metropolia] will be represented by our elected representative.” [10] Ibid., p. 90. The American schism had, for now, come to an end.

However, almost simultaneously, the long, eventful, and much-suffering life of His Beatitude, Metropolitan Antonii, was also coming to an end. The tragedy of the Revolution and the enormous problems of the subsequent emigration had caused him deep spiritual anguish, to such an extent that his health began to break down. A profound physical weakness afflicted him so that he could no longer walk and had to be carried everywhere in a chair, although mentally he was completely alert and functional.

Antonii had often written about what he called the mystery of “compassionate love,” or the Christian virtue of “со-suffering.” He himself modeled this heroic virtue. On his own robust shoulders, he had psychologically carried the enormous cross of the shattered Russian Church more than most, simply because he had the strength to do it, and believed he was appointed to this task by God until, finally, his constitution could bear it no longer. At his request in 1934, Archbishop Anastasii (Gribanovskii) was chosen as his “substitute” and raised to the rank of metropolitan.

Easter of 1936 was Metropolitan Antonii’s last Easter and, in spite of his great infirmities, he wished to celebrate the Paschal services himself. When told that he should rest, he typically replied: “What have I got to rest from? From doing nothing? When I die, that’s when I’ll rest, if it’s pleasing to God.” [11] Orthodox Life, (March/April 1976). Thus, in a wheelchair, Metropolitan Antonii served his last earthly Pascha in full vestments of red and gold brocade, and with a silver miter. The congregation was “in total ecstasy,” [12] Ibid. and when the midnight Liturgy and banquet were ended and all had gone home to bed, Antonii quietly wept with gratitude that he had been able to liturgize for one last Easter. Finally, on August 10, 1936, the first Metropolitan of the Church Outside Russia slept eternally. In the words of his devoted cell-attendant, “Those [last months] were unforgettable days. Now, when I recall them, my soul trembles and feels painful; then it rejoiced, but now it grieves, for ‘the Bridegroom has been taken away from us and we cannot rejoice.” [13] Ibid. 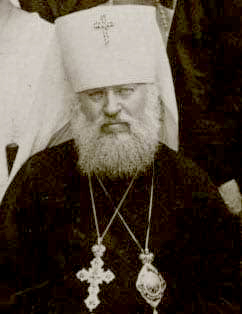 Metropolitan Platon (Rozhdestvenskii, d. 1934) did a lot for Russian Orthodoxy in America

At this moment, however, a familiar and gifted personality — one so profound that fellow bishops would later bestow upon him the revered title of “Most Wise” — Metropolitan Anastasii, was about to write the next chapter in the history of the Russian Orthodox Church Outside Russia.