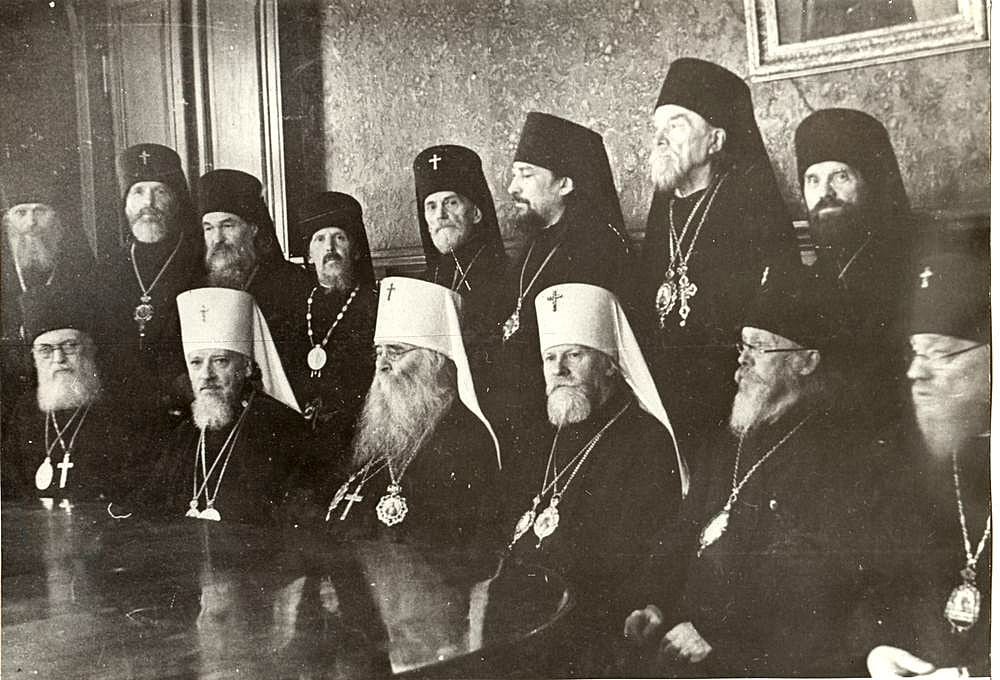 Refutation of a Moscow Patriarch in 1943 and breach with American Metropolia in 1946.

As the war with Nazi Germany expanded, Soviet dictator Josif Stalin sought to mobilize the USSR’s citizens in a massive effort to fend off the German invasion. After the Nazi invasion of Russia in 1941, he decided he needed the help of the Church in the defense of Mother Russia, and so he called upon Metropolitan Sergii and others to encourage patriotism on the part of the masses. As a sign of goodwill, Stalin at last permitted the election of a new patriarch, in 1943. The patriarchal throne had been vacant for nearly eighteen years, since the death of Tikhon. During that time, several hierarchs, who had been named by Patriarch Tikhon before his death, assumed interim authority as locum tenens, or “guardians of the throne.” All but the last of these had been quickly arrested and exiled (some were martyred) in the mid-1920s. The last on the list was Sergii who, now an old man, was still presiding over what remained of a devastated Church, most of whose parishes had long since been closed, and with only a skeleton crew of clergy to serve the needs of the multitudes who secretly practiced their faith on one level or another.

On September 4, 1943, Metropolitan Sergii was summoned by Stalin to a private meeting in the Kremlin. Five days later, he was “elected” patriarch by a mere eighteen bishops — most of whom had been in forced retirement or in labor camps (scores of diocesan bishops had already perished in prison). Obviously, however, this was not a free election because the government had made it clear that there was only one candidate — Sergii.

The appearance of a new patriarch had an electrifying impact on the Russian Church in America. At a meeting of American bishops six weeks later, a majority of them decided to commemorate Sergii at all Divine Services. Here it must be understood that, in Orthodox policy, the act of commemorating a bishop (patriarch, metropolitan, etc.) signifies both oneness of mind and administrative unity with that prelate. However, the American bishops did not intend this to be interpreted as a capitulation to Moscow. There was no administrative union with the Patriarch, nor could there be under wartime conditions, and most of the bishops believed that Sergii was only a puppet-patriarch.

More significantly, the Metropolia decision to commemorate the Patriarch was done without consultation with, or approval of, anyone else. The Synod of Bishops in Yugoslavia was simply left out and, because of the upheaval and chaos of the war in Europe, nothing could be done about it for the time being.

After a reign of less than nine months, Patriarch Sergii died in May 1944. The new Patriarchal locum tenens was Metropolitan Aleksii (Simanskii), who quickly assured Stalin of the Church’s unswerving loyalty and cooperation. In return for this, in early 1945, he was “allowed” to be “elected” thirteenth patriarch of All-Russia. Again, there was only one candidate. The American bishops decided to send Bishop Aleksii of Alaska, two priests, and a canon lawyer as official representatives to the enthronement in Moscow. But, upon their return, the American Church was presented with an ukaz from the new Patriarch, which stated in part:

«His Holiness the Patriarch of Moscow and All Russia, and the Holy Synod [of Moscow], having examined the report of Bishop Alexei, arrived from America, concerning the desire of the American dioceses to unite with the Russian Mother Church… consider the following decisions to accord with the good of the Church…

In May 1945, the bishops of the American Metropolia met, considered and discussed the ukaz and, fearing Soviet influence, decided for the time being not to unite with Moscow, although many individual priests did strongly approve of the ukaz.

Where was the governing Synod of the Russian Orthodox Church Outside Russia in all of this? As previously noted, the war had virtually severed contact between hierarchs in America, Europe, and Asia. Nobody quite knew where anybody was, or even who among the bishops was still alive. Metropolitan Anastasii himself had fled, a “displaced person,” to Munich near the end of the war. Count George Grabbe had managed to rescue the extensive Church archives and evacuate them from Serbia to Germany. As soon as hostilities ceased, an immediate attempt was made to reconstruct the governing Synod in Munich, but it was not until August 1945 that Metropolitan Anastasii was finally able to restore contact with Metropolitan Theophilus in America. Upon being informed of the overtures made by Patriarch Aleksii to the American Church, Anastasii ratified the Metropolia’s rejection of Aleksii’s “terms.”

But the Patriarch was losing no time. The very next month, September 1945, he sent his representative, Archbishop Aleksii (of Yaroslavl and Rostov), to America. In his first meeting with Theophilus, Aleksii told him that the Metropolia must “sever all relations with the Church Abroad and cease commemorating Metropolitan Anastasii, and that an All-American Sobor [must] be convoked to be presided over by [himself] Archbishop Aleksii.” 2 Theophilus agreed and told Anastasii that the Metropolia was now prepared to reunite with the Patriarchate. Archbishops Tikhon and Vitalii and Bishops Joasaph and Jerome were vehemently opposed to this unilateral action, but Bishops Makarii and Aleksii of Alaska, deciding not to wait for the formal decision of a sobor, immediately rejoined the Patriarchate on their own. The American Church was again in chaos.

“Your proposed union with the Patriarchate has not only a spiritual, but a canonical character, and binds you with its consequences. Such a union would be possible only if the Mother Church were completely free and, moreover, only after a careful discussion of the matter at a general Sobor [of the entire Church Abroad], which, at the present time, cannot be convoked. The overwhelming majority of the bishops, clergy, and believers who have been evacuated to Europe are decidedly against union with the Patriarchate, which is unfree. The existence of the Synod [of the Church Abroad] is necessary to support the unity of Russian Orthodox parishes abroad and to avoid anarchy.” 3 [italics added]

As a result of this instruction, in May 1946, an American sobor meeting in Detroit renewed its ties with the Synod Abroad and appointed Bishop Jerome as its representative to the Synod, now meeting in Munich. That fall, Theophilus wrote: “A particular interest is now being shown in Orthodox Americans by Moscow, by the so-called Patriarchal Church which, in reality, does not exist — since, after the blessed repose of His Holiness Patriarch Tikhon, the election of his successors by All-Russian Church councils were conducted not according to the canons of the Church, but by the ukaz of the atheist civil authorities” [italics added] — a serious violation of the good order of the Church.

In a similar vein, Archbishop Leontii in America said, “My conscience does not permit me to submit to the Patriarch. In the future, the Synod of Karlovci will come to America, and therefore it is not necessary for us to break ties with it.” 4

Attended by eight bishops and more than two hundred clergy and laity, the All-American Sobor convened in Cleveland on November 26, 1946, chaired by Metropolitan Theophilus. Immediately three strong viewpoints were expressed by the various speakers. First, that the Patriarch was neither freely elected nor free to rule, and therefore, the American Church should await more positive developments before reconciliation with Moscow. The second view was that the American Metropolia should immediately accept Patriarch Aleksii as its spiritual head, on the condition that he grant self-government — autonomy — to the American Church. The third view, shared by a majority, was that, regardless of Moscow, administrative ties with Metropolitan Anastasii and the Church Abroad must immediately cease on the grounds that if the Metropolia were to be independent of Moscow, it must also be independent of the Synod Abroad. By a vote of 187 for and 61 against, the following resolution was approved:

“Since the Moscow Patriarchate is incompatible with the Synod Abroad of the Russian Orthodox Church, the American Church ceases any administrative submission whatever to the Synod Abroad, although it will dwell in brotherly and prayerful communion with all Churches in the dispersion. In case His Holiness the Patriarch of Moscow should find our conditions unacceptable, our American Orthodox Church will remain in the future self-governing until such a time as the Moscow Patriarchate will find them acceptable and grant what we have asked.” 5

Four of the eight bishops strongly protested this decision and, by the following spring, had been excluded from the Metropolia’s deliberations. These prelates, however, continued prayerful and administrative union with Metropolitan Anastasii.

In the meantime, Patriarch Aleksii informed Metropolitan Theophilus that, while “in principle” he did not object to self-governing status for the American Church, he was sending another representative, Metropolitan Gregorii of Leningrad, to consult with them. When Gregorii arrived in July 1947, he immediately requested a loyalty oath to the Soviet government from the bishops and clergy of the Metropolia. The impact of this was seen at the bishops meeting in San Francisco in November, where the question of submission to Moscow was postponed, although it was agreed that the Patriarch would still be commemorated at all divine services.

When Patriarch Aleksii heard of this, he immediately formed a Patriarchal Exarchate for America (which still exists today), naming Archbishop Makarii, who had already rejoined the Patriarchate, as exarch, with Archbishop Adam as his vicar. (In 1948, the Exarchate was able, by court action, to transfer the Cathedral of St. Nicholas in New York City from the Metropolia to their new jurisdiction.) Because Theophilus, in retaliation, now placed Archbishops Makarii and Adam under ecclesiastical ban, the Patriarch convened a spiritual court and tried and convicted all of the remaining Metropolia bishops on a charge of schism.

However, in 1948, a twenty-day civil trial over legal ownership of a parish in Los Angeles resulted in the following court decision:

“The Bishops’ Council and the Holy Synod of the Church Abroad constitute the supreme judicial tribunals of the Church organization upon matters of faith, discipline, general policy, and tenets of the Church.” 6

Notwithstanding this affirmation of the Church Abroad by an objective, non-Russian civil authority, Metropolitan Theophilus and those with him — Leontii of Chicago, Ioann of Alaska, Ioann of Brooklyn, and Nikon—continued for another twenty-two years to maintain complete separation from both the Moscow Patriarchate and the Russian Church Outside Russia.

In 1950, Theophilus died and was succeeded by Leontii who, in 1963, was contacted by Metropolitan Nikodim of Leningrad. Again, negotiations with Moscow for recognition and self-governing status were opened. The discussions continued under Leontii’s successor, Archbishop Ireney, and were successfully concluded in 1970, when the Metropolia was at last given the status it had so long sought from Moscow — “autocephaly.” Ireney was followed by Theodosius (who was still Metropolitan as of this writing).

But in December 1947, the senior of the dissenting hierarchs, Archbishop Vitalii, had responded to the various decisions of the Metropolia by calling a sobor of those whose mind-set was similiar to his. They then rejected what they regarded as disloyalty and betrayal by the Metropolia, and affirmed their ties to Metropolitan Anastasii.

The flock in North America had now been divided into three warring jurisdictions with rival hierarchies, none of which were in communion or administrative union with the others: the Exarchate of the Moscow Patriarch, the Metropolia, and the Russian Church Abroad. Over the next few decades, repeated and urgent appeals by various leaders of the Church Abroad to heal this three-way split went unheeded. Perhaps the most powerful of these came from Archbishop Vitalii shortly after the 1946 schism:

“Brethren, Orthodox people of America and Canada! It has long been time for us… to abandon our willfulness and arbitrariness… We cannot continually cast ourselves from one side to the other… There can be no Divine blessing on such acts. There is no other way before God, conscience, and law… than to unite…” 7