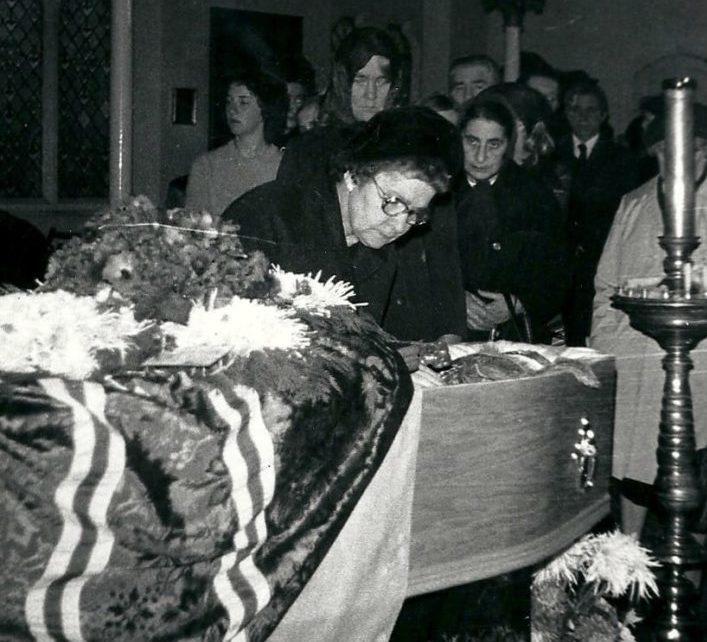 A life story of a ROCOR London parish’s cornerstone

Antonina Shchukina was born in Novgorod, Russia in 1918.  Her father, Vladimir, was an officer in the Tsar’s army. Taking his wife and baby child through war-torn Russia, he eventually escaped and managed to get to Yugoslavia. They settled in what is now Herzegovina, close to Montenegro. Antonina was sent to a Russian boarding school, the Russian Girl’s Gymnasium, Velika Kikinda, Banat. Kikinda is about 60 miles north of Belgrade. Antonina only went home to her parents occasionally because of the difficulty of travel between Velika Kikinda and her home in the mountains of Herzegovina. Tragedy befell the young Antonina in 1934 when her mother died of tuberculosis and her father committed suicide. Family friends arranged for the 16 years-old Antonina to travel to Finland where she had relatives who had fled there from Russia in 1918.  However, on the way to Finland, Antonina stopped off in London, where in 1935 she met and married Vadim Ananin (1911 – 1998).

In 1939 Archimandrite Nicholas Gibbes arranged for ten young Russian women to travel from Belgrade to England where they were to study English and sing at the Divine Liturgy which he served in English at the Chapel of the Ascension in Marble Arch, London Contemporaries of Antonina, the choir — known as the “Belgrade Nightingales” — came from the ‘Society for the Assistance to Former Pupils of the Kharkov Institute of the Empress Maria Feodorovna’ which was run by Maria Alexeevna Nekludova (1866 – 1948). [1]On the life of Madame Nekludova see: In Memory of Maria Alexeevna Nekludova. Published on the ROCOR Studies website, April, 2020. … Continue reading When the girls from Belgrade arrived in London, Antonina would have been overjoyed to meet them and happily volunteered to sing in the choir of Fr Nicholas Gibbes. [2] On the Belgrade Nightingales see: https://www.rocorstudies.org/2020/07/28/the-belgrade-nightingales-a-russian-choir-in-london-1939-1940/  https://bogoslov.ru/  accessed July, 2020.

The Ananin family were among the many refugees in London who had escaped from the Arkhangelsk district of north Russia. The father-in-law of Antonina, Alexei Stepanovitch Ananin (d. 1967), had found employment in the office of a timber merchant. By 1931, Alexei Stepanovitch, his wife, Elisabeth and their two Russian-born children, Leo and Vadim, had acquired naturalisation as British citizens. At this time the family was living in Croydon. Alexis was very much involved in the parish of the Russian Orthodox Church in Exile, [3]Up until the late 1970s what we now call ‘The Russian Orthodox Church Outside of Russia’ was known in the UK variously as the ‘Russian Orthodox Church in Exile’ or the ‘Karlovci Synod’. … Continue reading which after 1922 was using the church of Saint Philip’s, Buckingham Palace Road, London SW1. Alexei Stepanovitch served on the Parish Council for more than 30 years. When Archimandrite (later Bishop and Archbishop) Nikodem was appointed to London in 1952, Alexei Stepanovitch was the Parish Secretary. In 1956, when the Exile Church lost the use of Saint Philip’s and refused to share a building again with the Moscow Patriarchate, Alexei Stepanovitch, still the Parish Secretary, put forward a plan for building a new church in traditional Russian style. Lack of funds prevented his plans from being acted upon; the parish had to wait another 40 years before Alexei Stepanovitch’s dream was realised in the building of the Russian Orthodox Cathedral of the Dormition of the Most Holy Mother of God and Holy Royal Martyrs in Harvard Road, west London. When in 1958 the parish found a new home in a converted church building in Emperor’s Gate, Alexei Stepanovitch was heavily involved in negotiating the terms of the lease.

Devotion to the Church

Alexei’s elder son, Vadim, and his daughter-in-law, Antonina, lived at first in Purley, Surrey and later in Lambeth, south London. Antonina and Vadim had two children: Natalia, born in 1936 and Michael, born in 1940. In 1951 Vadim, by profession an engineer, was appointed to work at a newly-built power station near Poole in Dorset, about 120 miles from London. However, Antonina did not want to lose her involvement in the London parish and eventually obtained the use of a small apartment in west London, dividing her time between the family in Poole and the parish in London. The London house in which Antonina lived was owned by parishioners Captain and Mrs C. Pechovsky. Olga Illashevich, one of the Belgrade Nightingales, lived in a neighbouring apartment within the Pechovsky’s house.

After Archpriest George Cheremetieff (d. 1971) retired from his role as secretary to Bishop Nikodem of Richmond and Great Britain in 1961, Antonina became secretary to the Bishop as well as Secretary of the Church Council. 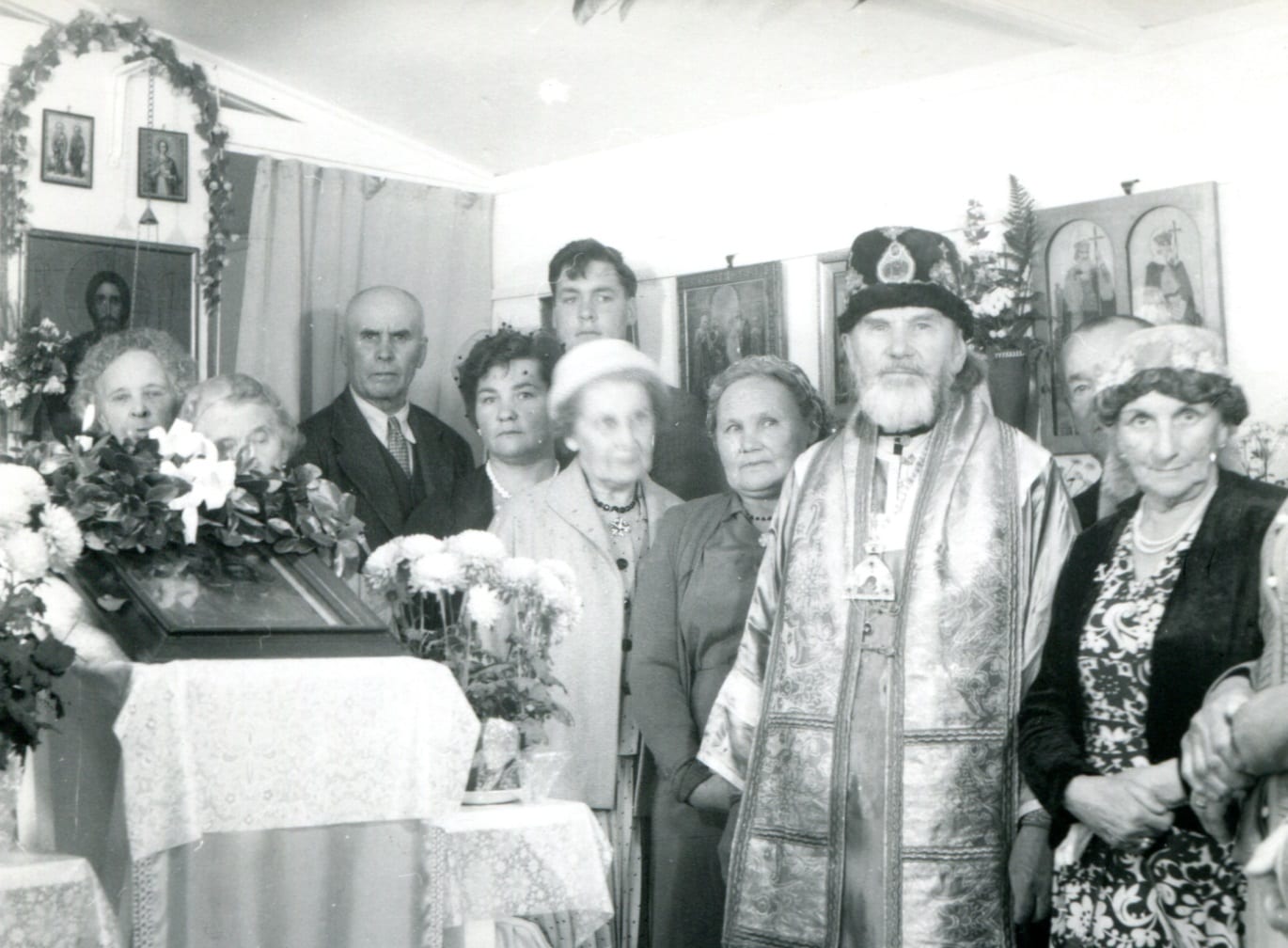 Some twenty miles from Antonina’s family home, at Marine Drive, Barton-on-Sea in Hampshire, was a home for refugees, provided by the British Council for Aid to Refugees (from 1954 to 1991). Most of the elderly Russian residents at Barton-on-Sea came from China while others came from a refugee camp in Trieste in northern Italy. A small Russian Orthodox chapel was opened in the grounds of the home in 1962 and for many years on a monthly basis Bishop Nikodem would visit on a weekday in order to serve Divine Liturgy. Of course, Antonina accompanied him and led the singing.

In 1965, Antonina had her first experience of directing the Emperor’s Gate Cathedral Choir on the occasion of the visit to the United Kingdom of Metropolitan Philaret (Voznesenky, d. 1985), newly elected First Primate of the Russian Orthodox Church Outside of Russia, who brought with him the miraculous Kursk-Root Icon. The Choir Director, Mr A. A. Khaltygin, was sick and in hospital for some months. It fell to Antonina to direct the choir in his absence, including the many services held during the visit of the Metropolitan. Having been a member of the choir since the 1940’s, in 1970 Antonina was appointed as the Cathedral Choir Director, following the retirement of Mr Khaltygin.

In 1968 the miraculous Kursk-Root Icon again was brought to England, this time by Archbishop Nikon (Rklitsky, d. 1976) who was Vice-Chairman of the Synod of Bishops of the Russian Orthodox Church Outside of Russia. Archbishop Nikon wrote extensively about his visit to England. He recalled, “The housekeeper at the podvorie [London clergy house] is run by the Sisterhood and a very diligent worker, Mrs. Antonina Vladimirovna Ananina.” 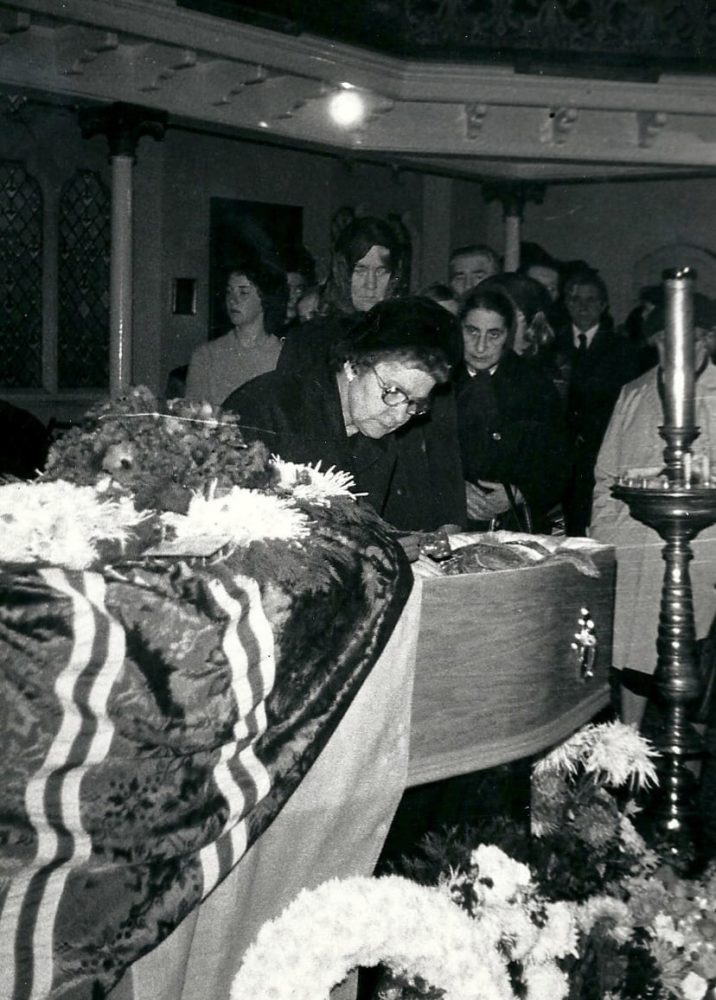 the festal meals served in the Church Hall. As one of his spiritual children, Antonina devoted many years to looking after the ageing Archbishop Nikodem. As the oldest bishop of the Russian Orthodox Church Outside of Russia, Vladyka Nikodem passed away in October, 1976, at the age of 93. Antonina Vladimirovna nursed him to the very end of his life. Afterwards, she wrote a moving account of the last days of Archbishop Nikodem and his passing which was published in Pravoslavnaya Rus’.

For another twenty years Antonina Vladimirovna continued in her role as Cathedral Choir Director, finally retiring in 1996.

On 28th May, 2006, at the age of 88, Antonina Vladimirovna died in Poole and was laid to rest with the remains of her husband in Parkstone Cemetery, Poole, Dorset. Three priests conducted her funeral, including one of her godsons, Hieromonk Avraamy. Antonina was survived by Natalia, Michael, and six grandchildren. 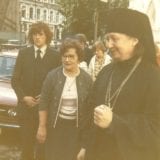 Antonina Vladimirovna was an outstanding member of the Russian Orthodox Church Outside of Russia. In addition to caring for her husband and children, Antonina wholeheartedly committed her life to the Church — singing and directing the choir, laboring with great diligence for the Sisterhood, and working closely with the ever-memorable Archbishop Nikodem. In 2017 a small brass plaque, commemorating the life of Antonina Vladimirovna, was affixed by grateful parishioners to the perimeter wall of the Cathedral of the Dormition and Holy Royal Martyrs, in Harvard Road, west London.

In a blessed falling asleep, grant, O Lord, eternal rest unto Thy departed servant, Antonina, and make her memory to be eternal.

The primary source for this paper is C. Birchall, Embassy, Emigrants, and Englishmen (New York, 2014). The Very Reverend Archimandrite Avraamy (Neyman) and Mr Michael Ananin graciously contributed to the writing of this paper. The author is a godson of Antonina Vladimirovna.