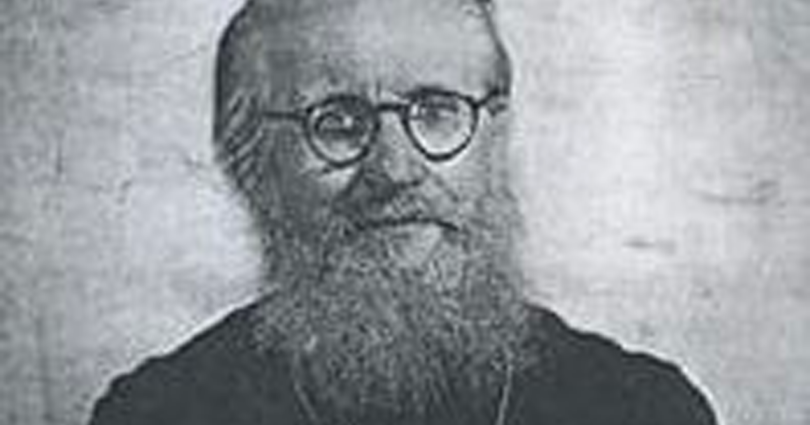 A biography of a bishop who served in North America Metropolia and Moscow Patriarchate in US. From 1935 to 1945 he was in communion with the ROCOR.

Mikhail Ivanovich Ilyinsky was born in the village of Gorodnya, in the Tver Province of northeastern Russia. This village was first mentioned historically in 1312, as the place where the Sainted Prince Mikhail Yaroslavich of Tver signed a peace treaty with representatives of defeated Novgorodians. The stone church of the Nativity of the Mother of God, dating possibly from the late 13th to the 15th centuries was still standing in 1915, evidenced by an early color photograph made by Sergei Prokhudin-Gorsky. In 1851, the Petersburg-Moscow railway route was built, and passed near the village. In 1856, the famous Russian playwright, Alexander Ostrovsky, visited the village while undertaking a study on the economics and life of the population along the Volga. By the late 19th-early 20th centuries, the village counted 1,200 inhabitants.

There is no information in any source concerning the family of Mikhail Ilyinsky, nor any information concerning his elementary education. In 1887, he graduated from the Tver Theological Seminary. Dating its origins to 1722, and being located in the Feodorovsky Monastery, the Tver Kremlin, and the Otroch Monastery during its history, as well as ‘near the church of Saint Nicholas at the zoo.’ From 1878-1881, through the donations of P.I. Gubonina, a new seminary building was built. Mikhail Ilyinsky graduated from the Tver Seminary in 1887. From 1913 to 1917, Archimandrite Veniamin (Fedchenkov, 1880-1961, later served as a Bishop in ROCOR, and was also later the Metropolitan of the Aleutians and North America, Exarch of the Moscow Patriarchate in the US) was Rector of the Tver Seminary. The Seminary was closed in 1918. In 1891, Mikhail Ilyinsky was ordained to the priesthood by Bishop Gabriel (Grigory Vasilievich Golosov, 1839-1916, later Bishop of Omsk and Semipalatinsk) of Staritsky, Vicar of the Tver Diocese. In 1901, Father Mikhail Ilyinsky graduated from the Saint Petersburg Theological Academy. In 1911, he was sent to the America.

His first duties in America were as Inspector of the Russian Orthodox Seminary in Minneapolis, Minnesota, its origins dating from 1872, when a Missionary School was founded in San Francisco. Bishop Nikolai (Ziorov, 1851-1915, later Bishop of Warsaw), then Bishop of Alaska and the Aleutians (the name of the Russian Diocese in North America at that time), moved the Missionary School to Minneapolis in 1897. Bishop Nikolai’s successor as head of the Diocese, Bishop Tikhon (Bellavin, later Patriarch and Holy New Confessor of Russia), changed the name of the Diocese to “of the Aleutians and North America,” and moved the Missionary School to Cleveland, Ohio in 1905, and replaced it with the first American Orthodox Theological Seminary in Minneapolis. In 1906, Father Leonid Turkevich (1876-1965; consecrated as Bishop of Chicago, 1933; ROCOR Bishop from 1935-1946, Metropolitan of the North American Metropolia from 1950 until his repose in 1965), was named as Rector of the Seminary.

In 1912, property including a ‘mansion’ was purchased in Tenafly, New Jersey. The Seminary was then moved to Tenafly, to be closer to the church administration in New York, and the ‘student population.’ The ‘mansion’ was large enough that there was sufficient space for a dormitory, classrooms, offices, and a chapel in honor of Saint Platon, the Confessor of the Studion (commemorated by the Church on 05/18 April). Father Mikhail Ilyinsky served on the faculty, and was appointed Rector in 1923. Named ‘Saint Platon’s Orthodox Theological Seminary,’  the Seminary was forced to close due to financial shortfalls, primarily resulting from the bolshevik takeover of Russia, and the ensuing cessation of financial aid from the Holy Synod in Russia, in 1924.

In 1921, a “group of American priests” addressed a letter to Patriarch Tikhon, complaining that since the ruling Bishop of the North American Diocese, Archbishop Evdokim (Meshchersky, +1935, later Renovationist ‘Metropolitan’ of Odessa) left the U.S. to attend the Alll Russian Council in 1917, that “the Canadian Bishop Alexander [Nemolovsky, +1960]” had “illegally taken the title of Archbishop and rule of the North American Diocese.” The letter was signed by the Protopriests Peter Kohanik, Mikhail Ilyinsky, the priest John Kedrovsky (future Renovantionist), and Igumen Pavlin of the Protection Monastery. [1]A.A. Kostriukov, Russkaya Zarubezhnaya Tserkov, 1925-1938, Saint Tikhon’s University, Moscow, 2011, p. 37 “In 1919, the Higher Church Authority [precursor to ROCOR] recognized … Alexander as diocesan Bishop [of the North American Diocese]. The Higher Church Authority granted Bishop Alexander competence over ecclesiastical divorce, thereby recognizing him as ruling Bishop of the Diocese. The jurisdictional competence of the Higher Church Authority seems to have not been in doubt.” [2]Seide, Father Georg, History of the Russian Orthodox Church Outside Russia from its Beginning to the Present (1983), manuscript copy, Part IV, p. 45.The letter to Patriarch Tikhon by the American clergy leaves a question: was the ‘protest’ against Bishop Alexander a veiled protest against the Higher Church Authority?

The “fateful schism” between ROCOR and the North American Diocese came in 1926. “Metropolitan Platon [Rozhdestvensky, +1934] disputed the [ROCOR] Synod’s jurisdiction over the communities in North America, and designated the Synod as uncanonical. Metropolitan Platon’s explanation was hardly convincing, inasmuch as he had since the evacuation [from Russia] collaborated in all the important resolutions of the Higher Church Authority, the Synod of Bishops, and the Council of Bishops [of ROCOR]. While journeying to Constantinople he had signed the document which declared the Higher Church Authority’s competence over the [Russian] refugees in all countries, where normal relations with the Patriarch were not possible. He allowed himself to be appointed as chaplain for the Athens Embassy church by the Higher Church Authority in November 1920. In 1921 he allowed himself to be sent to America to order affairs there. And finally he obtained the Synod’s provisional appointment as ruling Bishop in North America. He took part in the Karlovtsy Council of 1921, and at sessions of the Synod of Bishops until 1926. Not unjustly was he considered a co-founder of the Russian Church Abroad … After the break in 1926 it [the North American Diocese] kept about 90% of all the faithful, and all the hierarchs except Bishop Apollinary [Koshevoi, +1933] joined the schism.” [3]Ibid., Part IV, p. 49 Protopriest MIkhail Ilyinsky was among the clergy who joined the schism.

“In December, 1929, Platon formed the [North] American Metropolitan District, and what is known as the ‘Metropolia’ came into existence. At about the same time, Platon informed Bishop Tikhon [Troitsky, +1963] of the Church Abroad, who had come to America to assist [Bishop] Apollinary that he was prepared to ‘make peace’ with the Church Abroad if he could retain the title, ‘Metropolitan of All America and Canada.’ The Synod Abroad, however, having learned that Platon was involved in serious financial difficulties … refused the offer.”  [4]Holy Transfiguration Monastery, A History of the Russian Church Abroad, 1917-1971, pp. 81-82

In 1933, “Archbishop Benjamin (Fedchenkov) [+1961, later Metropolitan of Saratov & Volsk] arrived in America as the official representative of the Moscow Patriarchate. He demanded ‘a written pledge of loyalty to the Soviet power’ from Platon and his clergy … when Platon and his clergy refused the loyalty oath and once again declared the Metropolia ‘temporarily autonomous,’ ‘the acting Patriarchal Locus Tenens, Metropolitan Sergius, and his Sacred Synod declared the proclamation of the autonomy of the North American Diocese null and void, since it was made without the consent of the Moscow Patriarchate. The group around Metropolitan Platon was declared schismatic, and Metropolitan Platon himself, as the initiator of the schism, was suspended.’” [5]Ibid., pp. 82-83

“Metropolitan Platon died on April 20, 1934. In November, 1934, the Fifth All American Sobor of the Russian Orthodox Church in North America was held in Cleveland, Ohio. The Sobor elected Bishop Theophilus (Pashkovsky) [+1950] of San Francisco as Metropolitan. On January 5, 1935, Theophilus was suspended by the Moscow Patriarchate.” [6]Op. cit., 4, p. 86

Father Mikhail Ilyinsky, “while an Archpriest, in 1934, in the midst of the reaffirmation of ‘temporary self government’ by the Metropolia at the Fifth All American Sobor, suggested that a delegation be sent to Moscow to explain this status, thought his suggestion met with no support.” [7]OrthodoxWiki

In 1935, Father Mchael Ilyinsky was tonsured a monk with the name Makary, and consecrated to the episcopate on 13 October 1935, as Bishop of Boston. Also in 1935, the North American Metropolia reconciled with the Russian Church Abroad, at the Council in Serbia called by Patriarch Varnava (Rosich, +1937) of Belgrade and Serbia to reunite the Russian Church in the emigration. “A ‘temporary statute of the Russian Orthodox Church Abroad’ was drawn up and signed by all those present, including Evlogy and Theophilus. The ‘temporary ‘ aspect of the statute referred to the fact that it was to remain in effect until the Russian Church should become free.” Metropolitan Theophilus declared, “The position of the Russian Orthodox Church Abroad has been strengthened by the unity and peace which have been obtained. Now we have one center of administration in the Bishops Synod in Sremsky Carlovtsy, where the American Metropolitan District will be represented … On November 28-30, 1935, the Bishops of the Church Abroad [in North America] and the Metropolia met at St. Tikhon’s Monastery in Pennsylvania, and, after hearing Metropolitan Theophilus’ report on his trip to Serbia, they decided to put the agreement – i.e. the Statute – into effect … In October, 1937, an All American Sobor was held in New York, at which the ‘Temporary Statute’ was accepted.” [8]Op. cit., 4, pp. 89-92

Despite the fact that the wording of the Statute was unambiguous, stating that: “the highest legislative, judicial and administrative organ of the Russian Orthodox Church Abroad is the Council of Bishops who gather yearly, and its executive organ is the Holy Synod of Bishops,” [9]Op. cit., pp. 88-89 as well as the fact that Bishop Makary (Ilyinsky) had agreed to accept the Statute three times- at the meeting at Saint Tikhon’s Monastery in November 1935, and at the Council of Bishops meeting in Pittsburgh in May, 1936, at the 1937 All American Sobor, Bishop Makary “gave his opinion that the commitment to the agreement was more in the nature of a moral than an administrative agreement.” [10]Op. cit. 7 Also in 1937, Bishop Makary was appointed as Bishop of Brooklyn, and also appointed as Rector of the newly established Saint Vladimir’s Seminary in New York. Bishop Makary served as Rector of Saint Vladimir’s Seminary until 1944.

In 1940, the laying of the cornerstone of the Saint Vladimir Memorial Church in Jackson, New Jersey, was performed by Metropolitan Theophilus (Pashkovsky), Archbishop Vitaly (Maximenko, +1960), and Bishop Makary. [11]http://eadiocese.org/History/stvladhistory.en.html

In late 1944, the North American Metropolia decided to send representatives to the enthronement of the new Patriarch of Moscow, Alexei I of Moscow (Sergey Simansky, +1970), which took place on 04 February 1945. Despite the fact that the representatives arrived only after the enthronement, and the Council that followed, the newly enthroned Patriarch Alexei issued an Ukaz outlining conditions for the North American Metropolia to “unite with the Mother Russian Church,” which was delivered in 1945. The North American Metropolia refused. [12]Op. cit. 4. p. 69 In January of 1946, Bishop Makary (Ilyinsky) of Brooklyn, and Bishop Alexei (Panteleev, +1948) of Alaska, joined the Moscow Patriarchate, “which was met with an anathema by the [North American] Metropolia.” [13]http://religion.wikia.com/wiki/Makary_(Ilyinsky)_of_New_York

In May, 1946, Bishop Makary was elevated to Archbishop by Patriarch Alexei I. In 1947, Metropolitan Benjamin (Fedchenkov) was transferred to the Soviet Union as Metropolitan of Riga and Latvia, and on 31 October 1947, Bishop Makary was appointed as Acting Exarch of the Moscow Patriarchate in North and South America, and appointed as Exarch on 12 December 1947. Through 08-18 July, 1948, Archbishop Makary was present in Moscow for the celebrations surrounding the 500th Anniversary of the Autocephaly of the Russian Orthodox Church, and took part in meetings of Patriarchs, and other representatives of the Autocephalous Churches, and participated in discussions concerning various topics, including: the Vatican and the Orthodox Church, the Anglican church hierarchy, the ecumenical movement and the Orthodox Church, and the church calendar. On 31 July 1952, Archbishop Makary was elevated to Metropolitan, heading the Moscow Patriarchate’s Exarchate in America until mid-1953. “At the end of his life, weakened by illness, Metropolitan Makary continued to work in the difficult field entrusted to him. He reposed on 12 November 1953.” [14]http://archive.jmp.ru/page/index/1953126html94.html

All dates and information concerning vital statistics, education, service to the Church, geographical information, etc., are from Wiki sources, unless otherwise noted.