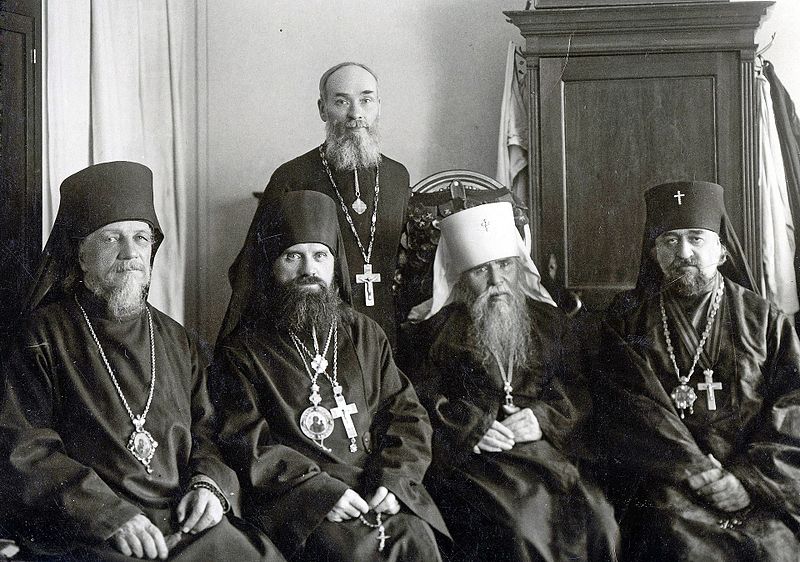 The Russian Orthodox Church Abroad first encountered Japanese religious policies after Japan occupied Manchuria in 1931 and established the puppet state of Manchukuo. Initially, the attitude of the Japanese authorities toward the ROCOR clergy in Manchuria was neutral and benevolent, but conflicts gradually began to escalate.

After the beginning of active hostilities on the Chinese mainland with the Japanese invasion of North China in 1937, a campaign to “mobilize the national spirit” was launched, in which religious organizations, especially Christian ones, were also actively urged to participate. This was reflected in the Religious Organizations Act of 1939, which allowed the state to register and legalize only those organizations deemed sufficiently “patriotic” (all of which had to be headed by Japanese citizens). In the case of the Orthodox Church of Japan, it was more a matter of assisting the Russian diaspora in Manchuria, which the Japanese government considered a springboard for a possible war with the USSR. This was the origin of the project of amalgamating the Far Eastern District of the Russian Church Abroad and the Orthodox Church of Japan, as suggested to the head of the latter, Metropolitan Sergii Tikhomirov, by the Manchurian hierarchs of the Russian Orthodox Church Outside of Russia with the sanction of the Japanese military mission in Harbin. Of course, this would have required severing canonical ties with Moscow, which Metropolitan Sergius refused to do. This decided his fate: the Council of 1940, which discussed the measures necessary to register the Church under the new law, adopted a resolution severing ties with the Moscow Patriarchate and making it necessary to elect a new – Japanese – bishop.

On September 5, 1940, Metropolitan Sergii was forced to hand over the administration of the Church to the first of the two leading candidates for bishop, the layman Arsenii Iwasawa, who taught Russian at the Ground Forces Academy. His program, aimed at “bringing the Orthodox Church into conformity with the Japanese national spirit,” also involved unification with the “Orthodox Church in East Asia”. Iwasawa was not a clergyman, and this led to discontent among the faithful, who split into numerous groups, with each nominating its own candidate for bishop. After Iwasawa refused flat-out to become Primate, the pro-Iwasawa group, which consisted mainly of members of the military, nominated Archpriest John Ono as their candidate for bishop. ROCOR First Hierarch Metropolitan Anastasy Gribanovsky telegramed Iwasawa, the interim administrator of the Church of Japan, from Yugoslavia, requesting his immediate appointment as Primate of the Church of Japan and the prompt ordination of a suitable candidate as bishop, without whom the Church could not exist. Metropolitan Anastasy had been a classmate of Iwasawa’s at the Saint Petersburg Theological Academy and had apparently kept in touch with him. It was reported in the European church press at the time that the Japanese authorities were planning to consecrate Iwasawa as bishop with the help of Metropolitan Sergii and Archbishop Nestor Anisimov of Kamchatka, whom they summoned from Harbin.[1]Ibid.

On March 14, 1941, Archpriest John Ono became the head of the Church of Japan. His consecration as bishop was performed in Harbin by Russian Orthodox Church hierarchs, headed by Metropolitan Meletii Zaborovskii of Manchuria and Harbin. In Harbin, he took monastic vows with the name Nicholas, while his wife joined a ROCOR convent. Bishop Nicholas Ono became the first Japanese bishop. After his return to Japan, some of the congregation did not recognize his ordination, and locked the gates and did not allow Bishop Nicholas and the parishioners who had come with him onto the cathedral grounds. The new bishop had no choice but to hold the Easter service in the deacon’s house. Gradually, the conflict subsided, and the retired Metropolitan Sergii assisted the new bishop with the administration of the Church.

At the same time, in the early 1940s, the relations of the Japanese authorities with the clergy of the Russian Orthodox Church in Manchuria came under considerable strain. This was largely due to the Japanese demand that Russian émigrés participate in ceremonies worshiping the goddess Amaterasu, the “ancestor” of the Imperial House of Japan. Many Orthodox believers refused to participate in these ceremonies, for which reason they were subjected to harsh repression, up to and including the death penalty. Such facts led to a change in the attitude of the ROCOR bishops in Harbin, who, even before the arrival of Soviet troops in Manchuria in August 1945, took up correspondence with the Moscow Patriarchate about transferring to its jurisdiction.