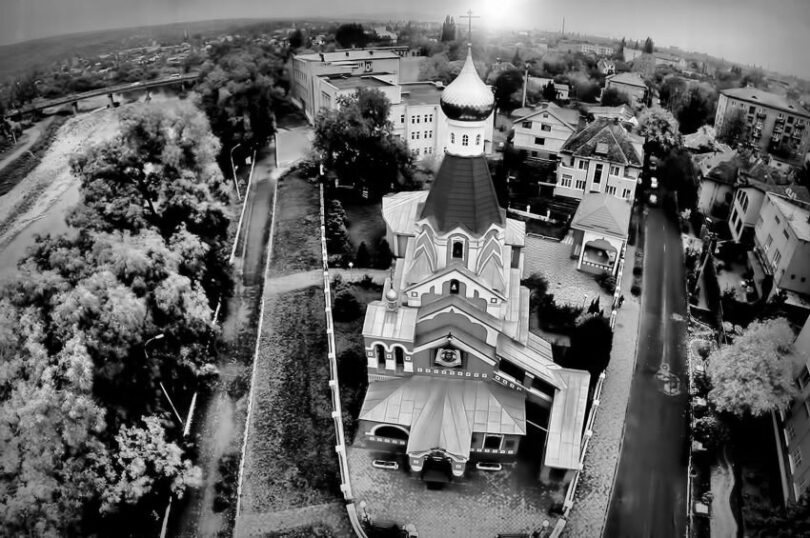 The memorial church errected in Uzhgorod to commemorate Russian troops fallen here during WWI. The future Archbishop Averkii Taushev sereved there before annexation by Hungary in 1939

The ROCOR leadership did not have any particular relations with the government of Fascist Italy. The small deanery of the Russian Orthodox Church in Italy with three congregations operated without any problems of note. With the sanction of the Fascist Republic of Salò, there was a so-called Cossack stan with about 40,000 Cossack soldiers and as many as 60,000 civilians in Carnia (Friuli), north-east Italy, from August 1944 through May 1945. With the blessing of Metropolitan Anastasy Gribanovsky, a separate Cossack diocese was created and two clergy congresses held. However, on May 6, almost all of the Cossack units were forced to leave for Austria.[1]SA, File 50/44, File 48a/44.

The relations of the ROCOR with the allied governments of the Axis countries were varied in nature. In Romania and Finland, the activities of ROCOR clergy were not tolerated at all. For instance, during his trips to Romania in the 1930s, Bishop Seraphim Lade performed a number of secret ordinations of priests, who were then persecuted by the local security service. The sole ROCOR congregation there, that in Bucharest, was also broken up.

In Bulgaria, thanks to active support from the Bulgarian Orthodox Church, the activities of the ROCOR clergy, headed by Saint Archbishop Seraphim Sobolev, were generally carried on successfully. Vladyka Seraphim fervently desired to participate in the revival of the Russian Church in his native country, and from the first months of the war, he began undertaking various actions to return to Russia as soon as possible along with the clergy under him.[2]Ibid., File 15/41. On November 4, 1941, the Bulgarian Synod resolved that, when he left for Russia, the archbishop could take all the Russian clergy serving in the Church of Bulgaria with him.

In the course of negotiations with the German embassy in Sofia in late October 1941, Vladyka Seraphim was given verbal assurances that the German authorities would be “eager to make arrangements with him” and that he could stay in Odessa for the time being, though a request by representatives of the Russian Orthodox Church in Berlin for a monetary loan to organize religious life for the Russian people was rejected. They were promised an international signature campaign to raise the funds needed through the Red Cross and the organization Pro Deo, but this did not occur. Archbishop Seraphim also appealed to the Bulgarian government to get permission for Russian clergy to leave Bulgaria; while the latter said it was necessary to find out the opinion of the Holy Synod, it agreed to send a mission of the Bulgarian Red Cross to Russia and advised the Archbishop to make contact with the Red Cross.[3]Central State Archives of Bulgaria, Fonds 791K, Series 1, File 67, Item 189–190.

However, there was a fundamental shift in the situation in late 1941. The governing bodies of the Third Reich did not support the position of the German Embassy in Bulgaria and categorically forbade all Russian emigrant priests without exception from traveling into the occupied territory of the USSR. As early as December 5, 1941, under pressure from the German authorities, Ivan Popov, the Bulgarian Minister of Foreign and Religious Affairs, banned the Bulgarian Synod not only from sending a mission to Russia, but even from providing material assistance for the revival of church life in the German-occupied USSR (though this ban was not fully enforced).[4]SA, File 34/42; Central State Archives of Bulgaria, Fonds 791K, Series 1, File 67, Item 284.

Archbishop Seraphim and his clergy did not travel to Russia because of German opposition and pressure from the Bulgarian authorities. Nevertheless, throughout the entirety of the War, he attempted to assist in some way or another with the revival of church life in the occupied territory of the USSR.[5]Pravoslavnaia Rusʹ 9–10/1942, p. 8.

Following the occupation of a number of neighboring countries, the government of Hungary issued a decree on April 27, 1941, establishing a Hungarian-Rusyn Orthodox Church with 200 parishes. In late 1941, the Hungarian government entrusted the administration of the Orthodox Hungarians and Rusyns, between them numbering over 160,000, to Archpriest Mikhail Popov, who was officially appointed as “administrator of the Eastern Greek Hungarian and Eastern Greek Rusyn parishes”.

Thereafter, up until September 1943, the German Foreign Ministry was strongly opposed to Metropolitan Anastasy traveling out of Belgrade, for fear that in passing through Hungary, he might meet with government officials there and come to an agreement with them. These speculations by German officials had no basis in fact. A survey of archival documents from the Synod and Metropolitan Anastasy has revealed that the issue of relocating to Budapest, much less of heading the autocephalous Hungarian Orthodox Church, was never raised or discussed, and ultimately, no such Church was created. This notwithstanding, until 1945, the Russian Orthodox Church was able to conduct its activities unimpeded on Hungarian territory.

Thus, during World War II, the administration of the Russian Orthodox Church was subject to the peculiarities and vicissitudes of the religious policy of the Third Reich. The Nazi leadership in Germany had a negative attitude toward the Orthodox Church in general and the ROCOR in particular and considered it a potentially dangerous nationalistic and monarchical organization that sought to revive the great, united, and indivisible Russia of the past. However, for tactical reasons, certain agencies of the Third Reich made concessions to the ROCOR. At the same time, the basic negative tendency in policy remained constant throughout ROCOR clerics were not allowed into the occupied territories of the USSR and faced interference in their efforts to revive church life in Russia and in providing pastoral care for the Soviet prisoners of war and Ostarbeiter; attempts were made to isolate the Synod of Bishops, and so on. The ROCOR’s relations with other Axis countries and their allies ranged from neutral (Italy, Hungary) to sharply negative (Romania, Finland).