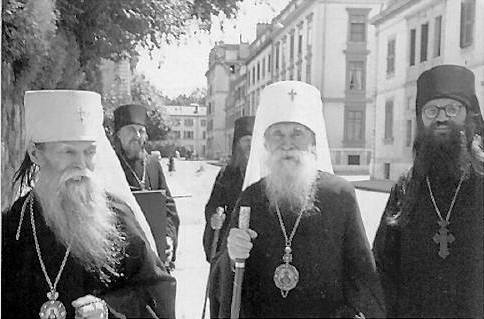 The conditions of the Cold War contributed to civilized communications, if not mutual understanding, between representatives of Russian emigre churches

This account supplements the correspondence between the two metropolitans that took place in 1946-1949. “How Wonderful it Would be if All of us Russian Exiles Would Attain the Church’s Freedom from All Influences that Are Earthly, Worldly, and Not of the Church” Correspondence between First Hierarchs of the ROCOR and Parisian Exarchate (1946-1949).”

The Second Diocesan Congress of the Western European Exarchate (“Evlogians”) held in 1949 adopted a decision to look for rapprochement with “synodal jurisdiction” (ROCOR). In his memoirs, Archpriest Vasily Zenkovsky recalled the solemn declaration by Metropolitan Vladimir about his readiness to meet with Metropolitan Anastassii. Even though the correspondence mentioned above reached an impasse, the meeting nevertheless took place in June 1950. That was the end of the attempts at dialogue between the two Russian refugee churches. In November 1950, Metropolitan Anastassy left Muhcih for the United States for permanent residence.

The meeting did not fall into place for a long time, not until a certain Ms. Fischer, the Russian Orthodox wife of a wealthy Swiss man, made efforts in order to arrange it. She covered all the costs of travel to Geneva (which was chosen as a “neutral location” for the meeting) and of lodging for both Metropolitans during their stay. Her initiative and insistence finally had the desired effect on Metropolitan Anastasii, who had been putting off the meeting.

Based on a manuscript from the personal archive of Nikita Struve