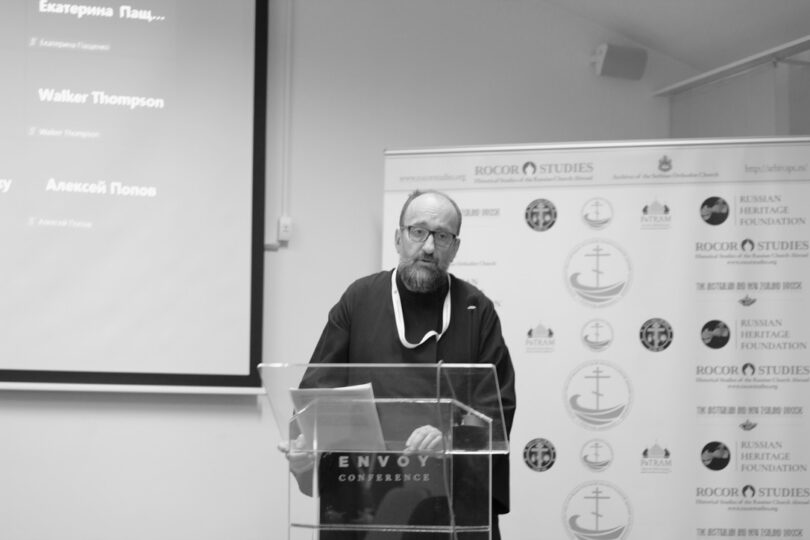 From the editors of the Russian website Global Orthodox

We spoke with Deacon Andrei about the aims and mission of the conference, about topical issues addressed in the papers on the ROCOR presented at it, and about the current situation of the Orthodox Churches in the world.

Tell us about the relevance of the conference. How are the problems and issues raised at the conference related to issues in contemporary Church life?

I know that conferences on the centennial of the mass political emigration after the Russian Revolution have been held in Russia in recent years: on October 16, 2020, Moscow Theological Academy hosted an all-Russian academic conference, dedicated to the Feast of the Holy Protecting Veil of the Mother of God, about “The Russian Exodus (Evacuation of Crimea) a Century Later: 1920–2020”, and on March 10–12, 2021, Saint Tikhon’s Orthodox University of Humanities hosted one on “Russian Emigration: Church Life and Theological and Philosophical Heritage”. For the Russian Church Abroad, the conference “Links Between Times: Conclusions and Perspectives. On the Centenary of the Russian Church Abroad” was unprecedented. On the whole, the talks given at it on problems of the diaspora church and conciliarity, illustrated by the example of the Russian Church (Abroad) in the 20th century, have given us much material for understanding how Holy Tradition can be applied in our time, and how “letter” and “spirit” are related.

With what meaning do you invest the concept of “Conclusions and Perspectives” in Church History?

Historical scholarship relies on reconstructing facts in their contradictory totality and then analyzing the resulting historical canvas. It is these principles that the authors of the talks followed in covering various aspects of the ROCOR’s century-long history. Such reflection on the ROCOR’s historical journey is the “bottom line”. It helps to answer questions like what parts of our heritage are consequences of particular historical circumstances, and what issues need to be solved today?

In your opinion, what is the position of Orthodoxy in the world today?

The concept of the right glorification of God (orthodoxy) implies that there is another, wrong kind of glorification (heterodoxy). The Orthodox Church explains that this right, authentic confession of faith is preserved through the ‘transmission’ – or ‘tradition’ (παράδοσις) – from one generation to another of a fundamental, doctrinal “rule of faith”. This process is thus not possible without preservation and conservation. Accordingly, Orthodox theology that derives from this attitude or relies on these notions may be rejected in today’s society, which does not accept the notion of Truth. Our goal is the same as it was 2,000 years ago: to witness to the world about Christ Who heals and resurrects Man who is afflicted by the passions.

I believe it is important to keep in mind that all Orthodox churches share the same dogma and doctrine of spiritual life. Therefore, even though we do not talk to each other, we are mystically united when thanks are given to God in the Holy Eucharist.

Shortly after Fr. John Behr became Dean of St. Vladimir’s Seminary in New York City, he suggested discussing the idea of establishing an Orthodox university in the United States. The seminaries that already existed could become campuses for it. An approach at this level rises to the challenge that secularization poses to all the Orthodox in the United States. As I understand it, his call for a conversation on this topic went unanswered.

How do you assess the processes taking place in Orthodoxy today against the backdrop of various contradictory events: the desire for the unification of the churches, the split between the Phanar and Moscow, and the oppression of Orthodox Christians in various parts of the world, from the countries of the former Yugoslavia to Ethiopia?

It is important to remember that the Lord commanded us to be one (John 17:21). The hierarchy of the Russian Orthodox Church Outside of Russia was guided by this in restoring prayerful communion with the Moscow Patriarchate – though there were no insurmountable reasons for our separation.

Speaking of how we present ourselves to the outside world, I will cite the example of Belfast, Northern Ireland, where I did my doctoral work. Belfast, as you know, has a reputation of being a “British Chechnya” owing to the religious conflicts there. Despite the divisions, Orthodox congregations under the Patriarchates of Antioch, Moscow, and Romania are springing up all over this small city – and recently also one under the Russian Orthodox Church Outside of Russia. It is clear that all of these congregations have their own liturgical and pastoral traditions. But do our parallel existence in isolation and frequent conflicts not undermine our witness to there being one universal (Catholic) Church?

In answering the second part of your question, I would like to point out that the Inter-Conciliar Assembly Commission on Theology and Theological Education, in which I am also involved, is working on a document entitled “Orthodox Reflection on the Causes of Extremism and Terrorism”. There is a special section in it on “Persecution of Christians as a Manifestation of Extremism and Terrorism,” expressing solidarity with those who are persecuted for outwardly demonstrating their Christianity both in “post-Christian” countries and around the world.

What are the main talks you would highlight?

Over the course of three days, there were 23 talks that amounted to a chronological history of the ROCOR, beginning with the Russian Civil War – before the ROCOR came into being – and moving on to its existence in Yugoslavia, and during the Second World War and the Cold War. Historians reconstructed this historical canvas and helped contextualize how the ROCOR came into being and responded to the various challenges of modernity. A full list of papers can be found here.

I myself spoke about the attitude toward conciliarity in the ROCOR, so my interest was especially piqued by Prof. A. A. Kostriukov’s (STOUH) talk outlining the ambiguous relationship between the episcopate and the laity in the 1960s and 1970s. Deacon Vitaly Permiakov’s (St. Vladimir’s Seminary, Yonkers, N.Y., USA) talk on the reconstruction of the Liturgy of St. James led us to consider, through the example of liturgical work in the ROCOR, how unproductive the “label” of “modernism” is.

Each day ended with summarizing remarks by His Eminence Metropolitan Mark of Berlin and Germany. In this way, we had an invaluable opportunity to connect the conference with the ROCOR itself, as represented by its most senior hierarch.

How are you looking forward to continuing the conference?

First of all, by continuing the conversation among all members of the Russian Church Abroad. The main treasure of our Church Abroad is her people. It seems appropriate that our Synod of Bishops should commission a statistical study of the demographics and social and linguistic makeup of the Russian Church Abroad. There are many professionals among the people of God who could help our bishops. In addition, consideration could be given to the possibility of creating something similar to the Inter-Conciliar Assembly (ICA) of the Russian Orthodox Church (Moscow Patriarchate) within the ROCOR, that is, a community of experts whom our bishops could task with preparing various documents for to be reviewed and approved subsequently by the Council of Bishops. The existing committees under the aegis of the ROCOR Synod of Bishops could be turned into something akin to the ICA. Such are my aspirations for the future of the Church Abroad.

My dynamic colleague and co-organizer of the conference, Dr. Radovan Pilipović, Director of the Archives of the Serbian Orthodox Church, expressed a hope that Belgrade could become a capital for the study of history of the Russian Orthodox Church Abroad. I, too, for my part, look forward to future encounters with Belgrade.

Father Andrei, thank you for the interview!