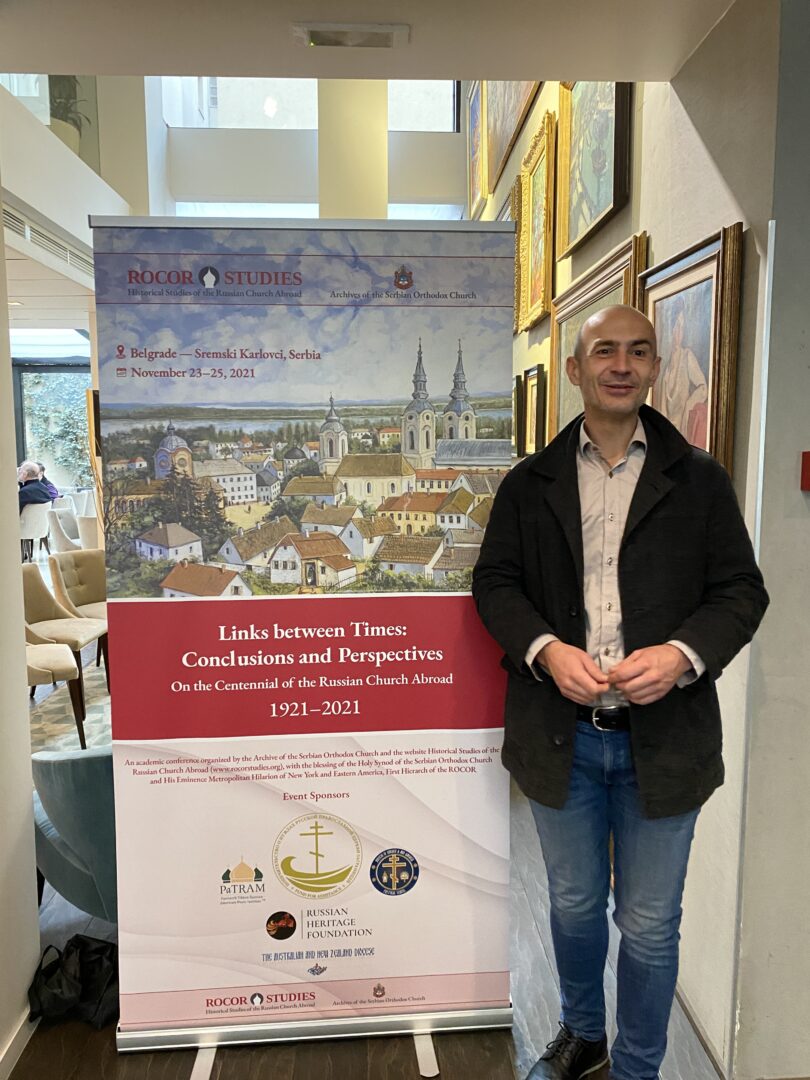 S.Petrovic was an indispensable part of an organizing conference committee. He is in the photo next to the banner that he designed.

August 2021 marked the centenary of the day the Council of Bishops of the Serbian Orthodox Church took the decision to grant canonical protection to the Russian Temporary Higher Church Administration Abroad (often abbreviated as THCAA) [in Russian: Временное высшее церковное управление], which was soon inherited by the Supreme Church Authority Abroad (abbreviated in English as SEAA) [in Russian: Высшее русское церковное управление за границей (ВРЦУЗ)] — an event in which Bishop Nicholai Velimirovich actively partici­pated. Namely, on that occasion, after the speeches of Metro­politan Gavrilo (Dozic) of Montenegro and the Littoral, Met­ropolitan Varnava (Rosic) of Skoplje, and Bishop Nicholai of 2ica, “the suggestion of the 4th section, concerning the admin­istration of Russian refugees, was approved unanimously” (Pa­triarchal Archive of the SOC. Minutes from the 4th regular as­sembly of the Holy Hierarchal Synod of the Serbian Orthodox Church, held in Sremski Karlovci on August 18/31, 1921 — quot­ed according to paper by Rev. Fr. Nikolaj L. Kostur, “The Rela­tionship of the Serbian Orthodox Church to the ROCA: 1920­1941,” Nicholai Studies, Vol. II, No. 3 (2022): 56).

Metropolitan Antony (Khrapovitsky) settled in the town of Sremski Karlovci in February 1921. A few other bishops of the THCAA, including Anastasius (Gribanovsky) and Benja­min (Fedchenkov), as well as numerous priests and monks, re­located to Serbia in the months to follow, and with the agree­ment and support of the Serbian Orthodox Church, between November 21 and December 2, 1921 (November 8–20 according to Julian calendar), the “General Assembly of Representatives of the Russian Church Abroad” [in Russian: Всезаграничное русское церковное собрание] took place in Sremski Karlovci. This assembly was presided by Metropolitan Antony, and established the “Supreme Ecclesiastic Administration Abroad” SEAA), composed of a President (First-Hierarch), a Synod of Bishops, and a Church Council. This assembly was later renamed as the “First All-Diaspora Council” [in Russian: Первый Всезарубежный собор]. One century after the council in Karlovci — precisely on the same dates, although that was not planned — a conference “Links between Times: Conclusions and Perspectives. On the Centennial of the Russian Church Abroad, 2021–2021” took place in Belgrade and Sremski Karlovci from November 22–25, 2021.

The conference began with an informal reception on November 22 in the evening, when Prof. Psarev greeted speakers and guests noting that studies of the history of the Russian Church Abroad could help in understanding various contemporary processes. The next morning, on November 23, in the Holy Trinity Russian Church in Belgrade, the metochion of the Moscow Patriarchate, a memorial service was served for Metropolitan Anthony (Khrapovitski) and other reposed ROCOR hierarchs and devoted members. Speakers and guests of the conference then moved to the Envoy Hotel Conference Center, and after reading of an address by Patriarch Porfirije (Peric) of the Serbian Orthodox Church, delivered by his vicar Bishop Justin (Jeremic) of Hvosno, Prof. Vladimir Burega read an address from His Beatitude Metropolitan Onuphry of Kyiv and All Ukraine, Metropolitan Mark (Arndt) of Berlin and Germany read an address from His Eminence Metropolitan Hilarion, First Hierarch of ROCOR, and Prof. Psarev read address from the Dean of Holy Trinity Seminary Nicolas I. Schidlovsky. After these greetings, the work of the conference began.

The conference “Links between Times” was held in a hybrid format — the event was broadcasted from Serbia, and a few of the participants who were not present delivered their lectures online. The talks were held mainly in Russian and live broadcasted along with a simultaneous translation of discussions (translated in English by the conference interpreter Walker (John) Thompson, a Ph.D. candidate at the Heidelberg University). Questions put in English to Russian speakers were translated into Russian by the conference interpreter, and vice versa. The conference talks were delivered in eight sessions, organized in chronological order, and each panel was followed by discussions, comments, questions, and answers.

Here we will list the names of the participants of the conference and the papers they delivered:

Session I. The Russian Church in Exile before the ROCOR:

1) Andrei Vladimirovich Popov (Associate Professor, Department of History and Archive Studies, Institute of History and Archives, Russian State University for the Humanities; Director of Studies for Master’s Program on “History of the Russian Orthodox Church”, Moscow): “Archival Heuristics and the History of the Russian Church Abroad” (in Russian)

2) Vladimir Viktorovich Burega (Vice-Rector for Academic Affairs, Kyiv Theological Academy and Seminary, Kyiv): “Metropolitan Antony (Khrapovitsky) as a Ruling Bishop of the See of Kyiv and Galich (1918–1920)” (in Russian)

3) Iuliia Aleksandrovna Biriukova (Don State Technological University, Rostov-on-Don): “The Influence of Political Forces on the Activities of the South-Eastern and First All-Diaspora Church Councils (1919–1921)” (in Russian)

4) The Very Rev. Archpriest Dmitrii Olikhov (Department of Theology, Philosophy, and Cultural Studies, Dostoevsky Omsk State University; Omsk Theological Seminary): “The Convening of Church Councils in ‘White’ Russia as a Precedent for the Organization of the All-Diaspora Council of the Russian Church” (in Russian)

Session II: World War II as a Continuation of the Russian Civil War:

6) Ivan Vasil’evich Petrov (Saint Petersburg State University): “Contacts between the ROCOR and Clergy and Laity in the Occupied USSR during World War II” (in Russian)

8) Rev. Presbyter Jovan Marjanac (M.Div., Secretary of the Diocese of Canada of the Serbian Orthodox Church): “The Canonical Assessment of the ROCOR in the Works of Prof. Sergei V. Troitskii” (in Russian)

9) Svetlana Bakonina (Saint Tikhon’s Orthodox University of the Humanities, Moscow): “The Far Eastern Ecclesiastical District as an Alternative to the Supreme Ecclesiastical Authority of the Church Abroad” (in Russian)

Session IV: Interactions Between the ROCOR and the Serbian Orthodox Church:

11) Srećko Petrović (Ph.D. Student at the Faculty of Orthodox Theology at the University of Belgrade): “Churchmen of the Russian Orthodox Church Abroad in the Life and Work of Bishop Nicholai Velimirovich” (in English)

Session V: Russian Ecclesiastical Refugees in the Kingdom of Serbs, Croats and Slovenes and in Yugoslavia:

14) Viktor Ivanovich Kosik (Institute of Slavic Studies, Moscow): “The Deeds and Fate of Russian Clergy in Yugoslavia” (in Russian)

15) Alexey Yurievich Timofeev (University of Belgrade, Serbia): “The Fate of the Russian Parishes in Tito’s Yugoslavia, 1944–1954” (in Russian)

16) Aleksandr Valeri’evich Slesarev (Vice-Rector for Academic Affairs, Dean of the Faculty of Church History and Practical Church Disciplines, Minsk Theological Academy): “The Role of ROCOR Hierarchs Archbishop Filofei Narko and Afanasii Martas in Founding a Belarusian Diocese under the Jurisdiction of the Patriarchate of Constantinople” (delivered online, in Russian)

17) Andrei Aleksandrovich Kostriukov (Saint Tikhon’s Orthodox University of the Humanities, Moscow): “Problems in the Relations between the ROCOR Synods of Bishops and Lay Organizations from 1960 through the 1970s” (in Russian)

18) Serhiy Viktorovich Shumylo (Director of the International Institute of Athonite Heritage, Researcher at the Institute of History of Ukraine of the National Academy of Sciences of Ukraine, Associate Professor of the Department of Humanities of the National Academy of Leading Cadres of Culture and Arts of the Ministry of Culture of Ukraine, Kyiv): “The ROCOR and Catacomb Communities in the USSR in the 1970s–1980s” (in Russian)

19) Rev. Fr. Nikolaj Kostur (Secretary of the Serbian Diocese of Midwestern America): “The Relationship between the Russian Orthodox Church in North America and the ROCOR from 1920–1950” (in English)

21) Deacon Andrei Psarev (Professor of Russian Church History and Canon Law, Director of Undergraduate Program, Holy Trinity Seminary, Jordanville, New York): “The Development of the ROCOR’s Attitude to the All-Russian Council of 1917–1919 with Regard to the Issue of Conciliarity” (in Russian)

This conference included a few unofficial, non-scholarly but spiritual and intellectual enriching aspects — luncheon in the Serbian Orthodox Seminary of Saint Arsenije of Srem in Sremski Karlovci, organized by the Dean of the Seminary, Very Rev. Fr. Jovan Milanovic, screening of the documentary “His Excellency Baron Wrangel” (in Serbian with Russian subtitles) by director Bosko Milosavjevic (on November 24), dinner at the restaurant “Sesir moj” in Belgrade, where Metropolitan Mark of Berlin shared his insights on Saint John of Shanghai and San Francisco (on November 25). On the feast of Saint John Chrysostom (November 13/26, 2021) Metropolitan Mark celebrated Divine Liturgy along with a few participants of the conference in the Monastery of Vavedenje on Senjak. This convent was founded in the 1930s as the metochion of Monastery of Kuvezdin in Srem; the first abbes of the Monastery of Vavedenje was Hegumenia Melanija Krivokucin, on whose tonsuring was present Bishop Nicholai Velimirovich. After the Liturgy, His Holiness Patriarch Porfirije visited Metropolitan Mark at the convent. On the same rainy day, a walking tour of the Russian Necropolis in Belgrade was led by Dr. Aleksej Timofejev. At the very end of this event, Rev. Fr. Nikolaj Kostur with a few participants held a small memorial service for Metropolitan Antony (Khrapovitsky) on his tomb in the Iveron Chapel at the New Cemetery in Belgrade (in the late morning on November 26, 2021). More information on this conference is available at t“Serbia 2021” — dedicated to the academic conference on the past and present of the ROCOR “Links between Times” held in Belgrade in November 2021: https://www.rocorstudies.org/category/serbia-2o21/

Proceedings of the conference should be published soon, by the Archives of the Serbian Orthodox Church.