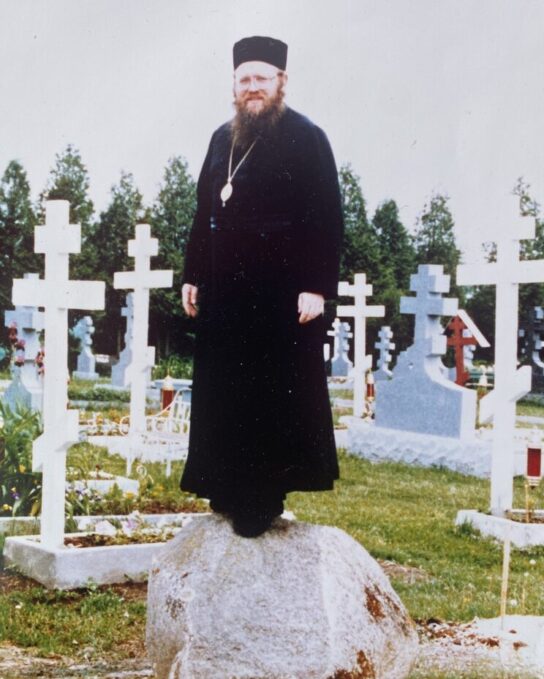 Reminiscences of the newly departed first hierarch of the Russian Church Abroad by an archbishop, archpriest, and protodeacon.

On May 16, the eve of the 15th anniversary of the signing of the Act of Canonical Communion between the Moscow Patriarchate and the Russian Orthodox Church Outside of Russia, Metropolitan Hilarion (Kapral), First Hierarch of the ROCOR, passed away. Funeral services for the newly departed Metropolitan were held on May 20th at the Synodal Cathedral of the Sign in New York City. His funeral was held on Sunday, May 22nd, at Holy Trinity Monastery in Jordanville, New York. In the present contribution, clergy of the Church Abroad who knew him personally speak about the kind of person he was.

After World War II, new parishes began to spring up throughout the Russian Diaspora. Vladyka understood that in addition to serving our [Russian] flock, he also had to be a missionary, revealing and showing the truth and beauty of the Orthodox faith to the natives of these places. I think that, thank God, Vladyka Hilarion was very successful in this. He really always thought about how to draw people in, about how to create more parishes and communities. There are now many English-speaking congregations in our diocese, including in the Eastern American Diocese, all of which are the fruits of Metropolitan Hilarion’s labors.

I was Vladyka’s cell attendant for six years. Vladyka liked to drive rather than fly when traveling. Sometimes our trips were quite long. In those years, the Eastern American Diocese was vast, stretching from as far north as Maine to Florida and Texas. We once traveled south from New York City along that very route. The trip took several weeks. Along the way, we visited parishes, both long-established ones, and ones newly opened with his support. He never exalted himself or played up the importance of the office he held. Metropolitan Hilarion always treated others as his equals. He never refused a talk, an audience, or assistance to anyone.

I remembered him as a joyful man. I never saw him without a smile. He received everyone with love and attention. He never let a bad mood show. In fact, I don’t remember him ever raising his voice to anyone.

When Vladyka was still living in Jordanville, he served as one of the monastery clergy and also worked in the print shop as a typesetting editor. In the Jordanville of those years, books were printed in the old (pre-Revolutionary) Russian orthography. Vladyka knew the old spelling well enough to be able to edit texts in it, knowing where the “yats” and the dotted “i”, and so on, should go. I learned from him how to type these texts on the computer.

Vladyka was always busy with something; he did not like to be idle. And when he became a bishop, as I said, his mission was to travel, visit communities, and open new parishes.

By God’s will, Metropolitan Hilarion, dear and beloved to all of us, has left us. Rarely in our lives do we meet such people who inspire everyone they meet by their personal example of meekness, humility, and patience. I am very sad for myself, above all, and for the entire Church Abroad, because this is a great loss. But I am happy for Metropolitan Hilarion, knowing that he has finally reached the place towards which he had been striving throughout his life. That is what we can assume from the way he lived his life.

I recall from reading St. Ephrem the Syrian how he says that a wise person treats everyone he meets as a bee does, flying from one flower to the next and so on. The wise “bee” does not adopt what is bad from the other person but takes only what is useful. In this way, it takes the best from each “flower”. St. Ephrem advises us to do the same. Metropolitan Hilarion did this and that. He is one of those rare people for whom you feel a great love when communicating him. I have always respected him and had a heartfelt love for him.

My wife fondly remembers that, when the Metropolitan visited our home, he always liked to say the traditional Orthodox words “Peace be upon this house!” upon entering. She noted that after the Metropolitan’s visit to our home, we experienced a state of peace for several months. Many other families did, too. May the Kingdom of Heaven be his, and eternal rest to his bright soul.

I was teaching at the seminary that day and I heard the bell ringing in the monastery, and realized that someone had passed away. But when I found out that it was Vladyka Hilarion… I was in shock. And I thought to myself: it is as if I have lost my mother or my father. Vladyka Hilarion, like Metropolitan Laurus, always remembered the people he met, and he did not distinguish between those he liked and those he did not, or those he needed and those he did not. Not long ago, I said to him: “Vladyka, I came to the Synod many years ago…” He replied: “I remember that, too.” But I know there are thousands like me. Vladyka remembered everyone. He really was a fisher as from the Gospels. Metropolitan Hilarion was a man of childlike faith: for him, there was, as I understand it, no division into this reality and that reality. For him, faith was one solid reality, so it is important for us to be happy for him, because he has arrived in the place towards which he had been striving all his life. Social networks are now full of mourning for him, of people’s pictures with him that they are posting… All this is understandable. But it is also important to remember him, now that he is passing into another reality. Though the way people remember him shows how connected he is to the entire Church Abroad, in which there is a sense of family: the priests were connected to him, and the Metropolitan is connected to us.