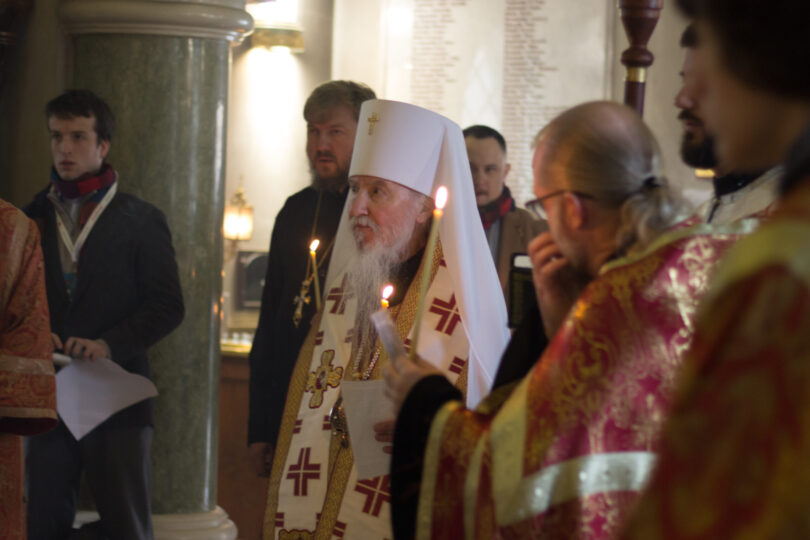 Metropolitan Mark is the senior bishop of the Russian Church Abroad, who acts as a locum tenens of its first hierarch’s see until the elections in September 2022

Your Eminence, thank you on behalf of our readers for taking the time to speak with us. Germany was a transit point for refugees from the former Russian Empire after the Revolution and from the Soviet Union after World War II. How, in church terms, does the situation in Germany differ from these earlier periods with respect to the war in Ukraine?

The situation is fundamentally different in that Germany, thank God, is not involved in this war, but is living through its consequences along with other European countries. My impression is that in Europe, Germany is bearing the lion’s share of responsibility for the refugees, after Poland, which is closer and therefore has a larger influx of people. The situation is also different in that the local authorities are more accommodating of Ukrainian refugees than refugees from any other country. For example, they immediately get the right to work, which it can take others several years to get. They are given all sorts of benefits in terms of living arrangements, such as transport fares.

Am I correct in seeing a similarity with the postwar period in that you have many refugee clergy in your diocese?

Yes, we have a relatively large percentage of new clergy. I think we only have a partial view of this. First, we have a parallel Moscow Patriarchate diocese, though obviously, many clergy are assigned to other jurisdictions, as well. And so, of course, we don’t have a complete picture.

You mentioned in one of your interviews that, at the outbreak of the war in February, long-distance truck drivers were, as it were, stuck in Germany without any means at all of supporting themselves. What is the German diocese doing now to help refugees?

At one point, we had people going around the highways looking for drivers, because most of them couldn’t get in touch with us or with the authorities. They were just stopped in parking lots and hoping it would all end. But it never did. So, they needed help, mostly food and somewhere to wash up, and things like that. I don’t know how that was resolved later.

Many of the refugees went directly to the church. First of all, I would like to say that I am glad that the first thing people want to do is to come to confession: they feel a need to clear their consciences. That is how they get to know our priests and our parishes. Some of them do join our parishes, at least for a time. Now, of course, we are in a different period, when the authorities are no longer assigning refugees to larger cities, but rather are sending them to the provinces. This makes things more difficult as far as the church is concerned because our parishes are mostly in big cities. Our priests are constantly traveling around the provinces to provide pastoral care for these people. But we realize that we can only reach a small portion of them.

We also had voices in our parishes urging us to cease commemoration, but we did not consent to this, because it would have placed us outside the canonical boundaries again.

Talking to the clergy and episcopate of the Ukrainian Orthodox Church, one observes that they are accessible and simple, as in the Serbian Church and maybe even more so than in our Russian Church Abroad. It seems to me that we have traded places: during the Cold War, there were parishes of the Moscow Patriarchate outside of Russia, in the UK, Germany, and other places, that, despite the confrontation, still commemorated the Patriarch. The Russian Church Abroad, on the other hand, was more similar in its independent stance vis-à-vis the Ukrainian Orthodox Church, which has been forced to become independent. Do you see an analogy in this, that we have now, as it were, traded places?

There is a striking difference with our situation. Even in the parallel Moscow Patriarchate diocese, there are clergy who do not want to commemorate [the name of Patriarch Kirill at church services –Protodcn. A.P.] or are very reluctant to do so. One priest has even transferred to the Patriarchate of Constantinople. Things are in flux and we don’t know how it will end. We also had voices in our parishes urging us to cease commemoration, but we did not consent to this, because it would have placed us outside the canonical boundaries again.

It ought to be said that we here in Europe differ from our hierarchs in America in our assessment of many issues.

In late July 2022, there was a conference in Munich of ROCOR hierarchs in Europe. Such informal meetings have taken place before, for example, when the late Archbishop Anthony of Geneva came to visit you. And they were held regularly when St. John (Maximovich) was the Ruling Hierarch of the ROCOR in Western Europe. What was the purpose of holding this session?

This had nothing to do with current affairs, but rather with the simple fact that we European bishops have common interests and problems. Last year, we asked the ROCOR Synod of Bishops for permission to create a conference like this to discuss pressing issues. It ought to be said that we here in Europe differ from our hierarchs in America in our assessment of many issues. We thus need a deliberative body of this sort. It was this body we consulted now. Of course, we will continue to work along these lines, because here in Europe, we want to speak with one voice, not disparately. It is important that we confer, that we know what problems the bishops are facing. After all, there are many countries in Europe in which our church has a presence, so we need to coordinate our actions.

On September 13, 2022, the ROCOR Council of Bishops will elect a new First Hierarch. That is, the bishops will gather as a closed corporation to choose a successor to Vladyka Hilarion. In your opinion, is the interaction between all the members of our Russian Church Abroad – the bishops, the clergy and the people of God – satisfactory?

In my opinion, in peacetime, it is quite satisfactory, because we have regular diocesan assemblies. The bishop finds out a lot at them. The same is true of when he visits the parishes in his diocese. Visiting parishes is a normal, natural thing that we do constantly. However, both – that is, diocesan assemblies and even conferences of pastors – were discontinued during the pandemic. And COVID disrupted our normal routine in many ways. The effects of the pandemic were felt not only in the Church, but throughout society. So, we have to gradually make up for it, restore what was lost during that time. After all, we lost three years.

We cannot simply accept some of the phenomena taking place there, nor can we subscribe to the public statements of some bishops in Russia and Ukraine.

What tasks do you think our First Hierarch will face when he is elected? What is expected of him?

I think, first of all, that we must settle the inner life of our Church Abroad. This life too, is upset in some respects. We must be prepared so that, in the future, events such as a war or COVID do not harm us as much as they have now. This includes the issue of visits to our dioceses, which for the past three years have had no personal contact with the First Hierarch, and also the burning issues of our relations with the Church in Russia and Ukraine. We cannot simply accept some of the phenomena taking place there, nor can we subscribe to the public statements of some bishops in Russia and Ukraine. We have our own views on these things. We must also think about how to develop a common view of these events in our Church Abroad.

Thank you, Vladyko Sviatyi, for your time. The interview gives much food for thought. Eis polla eti, despota!

God willing, it will be useful for people.