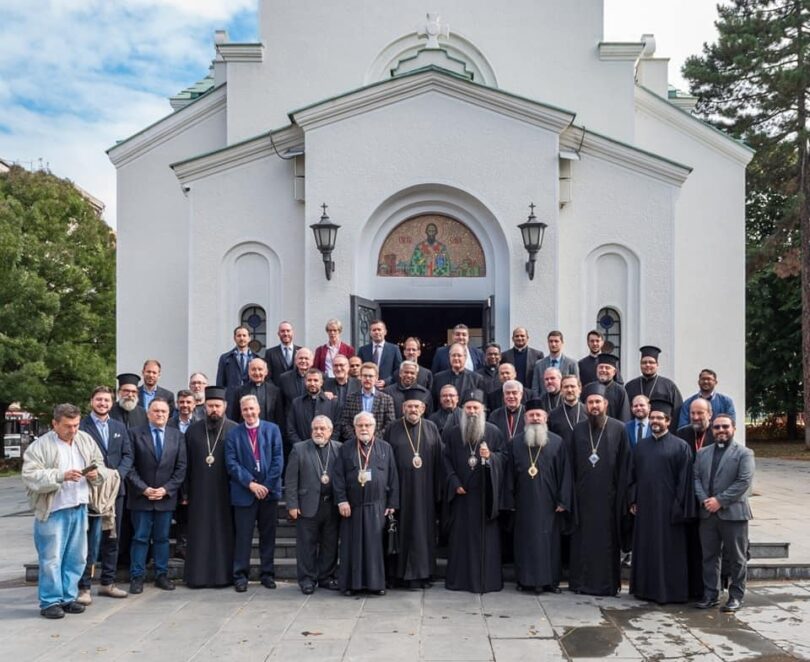 A rare occasion for canonists to meet new people in the profession, learn new things, and clarify old.

The Society for the Law of the Eastern Churches is not an ecumenical organization. It is a forum where professionals can listen to talks, meet with colleagues, and clear up ambiguous issues. Twenty papers on the canon law of Eastern and Orthodox Churches were presented at the congress. Dr. David Heith-Stade from the University of Vienna presented the first paper on Orthodox canon law. He explained the development of the ecclesiastical court in the Orthodox Church.

During the Congress, there were several presentations on the right of appeal. In his report on the right of appeal to the Ecumenical See, Metropolitan of Krini Kyrillos (Katerelos) gave several canonical rules and historical examples from the first and second millennia. All these examples clearly show that the appeals in question were made by Orthodox bishops and not by schismatics. Protodeacon Andrei asked a question about this in the context of the Ukrainian situation. The answer was that the Ecumenical See acted quite in the tradition of Orthodoxy by making the schismatics Orthodox. Questions about the acceptance of appeals were also asked by participants from Serbia and Romania.

Fr. Răzvan Perșa, a professor at the University of Cluj-Napoca, Romania, delivered a paper on “The Distortion of the Concept of Authority and the Right of Appeal in the Orthodox Canonical Tradition.” Dr. Răzvan showed convincingly that the Ecumenical See has the right to accept appeals from other Orthodox hierarchs but only to convene a Pan-Orthodox Council. Any other understanding would be in contradiction with the conciliar nature of the Church.
There was an interesting talk by the Grand Ecclesiarch of the Patriarchate of Constantinople, Archimandrite Aetios Nikephoros, on the controversial perception by the Synod of the Church of Greece of the rights of appeal of the hierarchs of the so-called new Greek territories to the Ecumenical See.

There was a talk by a leading North American Orthodox canonist, Protopresbyter Patrick Viscuso (Patriarchate of Constantinople), analyzing the contents of the Statutes of the Archdiocese of the Orthodox Churches of North America of the Ecumenical Patriarchate. The talk by Protodeacon Andrei Psarev was from the same category of document analysis. Protodeacon Andrei spoke about work on the Statute on Canonical Penalties and Disciplinary Punishment of Clergy, prepared by the Commission on Canon Law of the Inter-Conciliar Assembly of the Russian Orthodox Church. Protodeacon Andrei is a member of this Commission.

As usual, the congress was not limited to talks and conversations. On Wednesday, the conference attendees were received by His Holiness Patriarch Porfirije of Serbia. In his remarks, Patriarch Porfirije, the Primate of the Serbian Orthodox Church, said that the dogmatic teaching about the Church could not be understood in isolation from Church law and vice versa.

On Thursday, the participants visited Sremski Karlovci. While Belgrade was under Ottoman control through the early 19th century, Karlovci was on the territory of the Austro-Hungarian Empire. The palace of the Serbian Patriarchs, where Metropolitan Antonii (Khrapovitskii), the First Hierarch of the Russian Church Abroad, found refuge, is located here. The conference participants visited the famous Philological Gymnasium, the oldest school in Serbia, founded in 1791 by Maxim Suvorov, who came there from Russia by the order of Empress Catherine. The First All-Diaspora Council was opened in the main hall of the Gymnasium. On the way to Belgrade, Hegumen Stefan warmly welcomed the participants at Velika Remeta Monastery.

Thanks go to the organizer of the conference, Prof. Dr. Astrid Kaptijn of the University of Freiburg, for her efforts in organizing the conference and bringing new canonists into the ranks of Society.