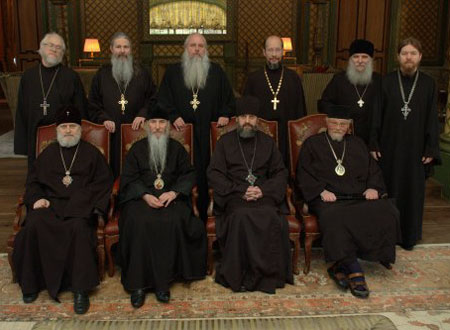 A meeting of joint comissions of the ROC and the ROCOR near Paris. 2005

A document drafted before the 2007 reconciliation by the joint commissions of the Moscow Patriarchate and Russian Church Abroad and adopted in 2005 by the Synods of both Churches.

The Russian Orthodox Church strictly adheres to the teaching set forth in the Creed that the Church of Christ is one.

As the Body of Christ and the sole vessel of salvation, as the pillar and foundation of truth, the Church never divided itself nor disappeared, but always, over the entire history of Christianity, taught the pure teaching of the Gospel in the abundance of the grace-filled gifts of the Holy Spirit.

Having received the command from the Lord Jesus Christ Himself, the Church is called upon to fulfill her Apostolic mission “to preach the Gospel to every creature” (Mark 16:15). For this reason, over the course of her thousand-year history, the Russian Church illuminated with the light of the Truth of Christ both those peoples among whom she was found and those of neighboring countries. At the same time, she strove to return into the salvific bosom of the Church the separated Christians of other confessions, and with this goal, in the 19th century, created special committees for dialog with them, taking into account at the same time the various degrees of their distance from the faith and practices of the Ancient Church. Up until the 1960’s, in hopes that their participation in inter-confessional meetings might encourage the study of Orthodoxy by Christians of other confessions, the Russian Orthodox Church Outside of Russia sent their representatives to such gatherings. The aims of such participation were expressed in a decision of the Council of Bishops of the Russian Orthodox Church Outside of Russia on December 18/31, 1931:

“Preserving faith in the One, Holy, Universal and Apostolic Church, the Synod of Bishops affirms that the Church never divided itself. The question lies only in who belongs to her and who does not. At the same time, the Synod of Bishops fervently welcomes all attempts of the heterodox to study Christ’s teaching on the Church in the hope that through this study, especially with the participation of representatives of the Holy Orthodox Church, they will ultimately come to the conclusion that the Orthodox Church, as the pillar and ground of the truth (1 Timothy 3:15), fully and without error preserved the teaching handed down by Christ the Savior to His disciples.”

Still, a significant portion of the Protestant world in the course of its development embarked upon the path of humanist liberalism and is losing its bond with the Tradition of the Holy Church more and more, changing by whim the divinely-established norms of morality and dogmatic teachings and placing itself at the service of the interests of the consumerist society, subjecting themselves to notions of earthly comfort and political goals. As “salt that lost its savor” (Matthew 5:13), such communities have lost their power to resist human passions and sins.

Such tendencies evoke profound anxiety, and have motivated the Orthodox Church to reexamine its relationship with various confessions and inter-confessional organizations.

The Inter-Orthodox Conference in Thessaloniki (1998) was convened in part to address this question. The practice of inter-confessional relationships was subjected to intense examination in the “Basic Principles of the Russian Orthodox Church’s Attitude to the Non-Orthodox” adopted at the Council of Bishops of the Russian Orthodox Church (2000). It is recognized that if the aforementioned negative tendencies reign in inter-confessional organizations, the Orthodox will be obliged to withdraw from them. For this reason, a resolution must be found in the nearest future to the problem of the degree to which existing forms of inter-Christian cooperation permit Orthodox representatives to remain free of those attitudes and participation in those practices which contradict the spirit of Orthodoxy. A condition of the participation of the Orthodox Church in inter-confessional organizations, including the World Council of Churches, is the exclusion of religious syncretism. Orthodox Christians insist on their right to freely confess their faith in the Orthodox Church as the One Holy Universal and Apostolic Church without conceding the so-called “branch theory” and definitively reject any attempts to dilute Orthodox ecclesiology.

The Orthodox Church excludes any possibility of liturgical communion with the non-Orthodox. In particular, it is considered impermissible for Orthodox to participate in liturgical actions connected with so-called ecumenical or inter-confessional religious services. In general, the Church should determine the forms of interaction with the heterodox on a conciliar basis, stemming from its teachings, canonical discipline and ecclesiastical expediency.

Nonetheless, the possibility of cooperation with the heterodox is not excluded, for example, in helping the unfortunate and by defending the innocent, in joint resistance to immorality, and in participating in charitable and educational projects. It may be appropriate to participate in socially meaningful ceremonies in which other confessions are represented. In addition, dialog with the non-Orthodox remains necessary to witness Orthodoxy to them, to overcome prejudices and to disprove false opinions. Yet it is not proper to smooth over or obscure the actual differences between Orthodoxy and other confessions.