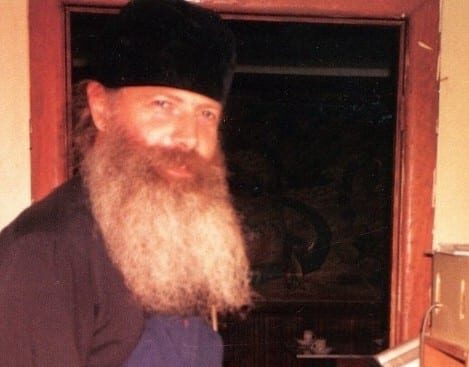 Monk Isaakii was one of those people which the modern world lacks. He was an idealist, in the best Orthodox understanding of the word.

Father Isaakii (Howard Schotter, in the world) was born in 1942 in the United States and was raised in England. His family is of Swiss Ger­man descent.

Father Isaakii was tall, with a broad thick beard and military bearing which conveyed an impressive image. For many years he served as an officer in the British Army. He was stationed in Borneo, in Germany, and fought against communist expansion in Saudi Arabia. His most difficult assignment was at the divisive religious-national conflict in Northern Ire­land.

Father Isaakii resided in many countries from Indonesia to India, he lived among well-to-do people, served in the Royal Life Guards (in Eng­land), and saw all that people strive for in this earthly world. Still he felt that all of this did not fulfill that which alone is needful — care for the sal­vation of one’s soul. Father Isaakii graduated from an Anglican seminary and became a priest, but the severe break with conservativism in that denomination which began about the time of his ministry, was complete­ly abhorrent to Father Isaakii. This forced him to consider: Is it possible that in the true Church there could occur such a monstrous flouting of ancient Christian norms? Then in the 1960s, as a result of this spiritual cri­sis in the Church of England, there occurred a strong movement of return to the Orthodox Church.

Father Isaakii, having first become acquainted with Catholicism, was then baptized into Orthodoxy with the name Hilarion at the St. Elias monastery in Wales. [1]In 2008, when I was living in the parish of St. Andrew, Edinburgh, Archimandrite John, who serves in St. Andrew, showed me benches carved by Hilarion Shotter. Not seeing the possibility of living an attentive Christian life in the world, Hilarion inclined towards monasticism. In 1985 he became a novice at the monastery where he was baptized and within a year was tonsured as a Rassaphor. He then lived for a time at the Docharia monastery on Mt. Athos. He later traveled to America where he was accepted into St. Tikhon’s Monastery.

In 1987 Father Hilarion decided to return to Europe. Before that, he went to New York and visited the Cathedral of the Synod of Bishops of the Russian Church Abroad where Bishop Hilarion invited him to spend some time at Holy Trinity Monastery in Jordanville, then return with him to New York. Vladyka Hilarion returned alone to New York. Father Hilarion found here that which he desired — Holy Orthodoxy.

On the eve of the Akathist Feast of the Mother of God, the fifth week of Great Lent, 1990, he was tonsured to the Little Schema and named Isaakii in honor of St. Isaakii of Optina. On the first of October 1995, Father Isaakii was tonsured a reader by Archbishop Laurus.

Wherever Father Isaakii was assigned at an obedience he strove not to spare himself and to do everything possible in order fulfill his duty in the best way possible — whether in the bakery, library, office, Seminary, bookbindery, or on the staff of Orthodox Life.

Father Isaakii treasured the ideals of Russian monasticism and the Russian Church Abroad. He was very devoted to these ideals and sorrowed whenever he noticed any deviation. He could not bear any divergences in the proper way of chanting.

For many contemporary Chris­tians who accept Orthodoxy as an ideology or apologetical doctrine, Father Isaakii can serve as an example of Christian struggle. He always strove not to expose his displeasure no matter what happened. Being well educated in the European spirit (he completed the history course at the Trinity College in Dublin) any snobbishness, common among the so-called educated among us, was foreign to him.

Father Isaakii always strove to help his neighbor when in need. When our Church received under her wing an Orthodox community in Haiti, a candidate from there came to Holy Trinity Monastery to prepare for the priesthood. In spite of all his responsibilities Father Isaakii for two months spent much of his time instructing him on Liturgies in French. Father Isaakii’s degree of monastic concentration was reflected in the fact that he avoided idle conversations, was always occupied with labors to the glory of God, and avoided leaving the monastery.

He was a convinced opponent of Sergianism and Ecumenism. His essay, “Commentary on Latest Recommendations of the Joint Commis­sion for Theological Dialogue Between the Orthodox and Oriental Ortho­dox Churches” (published in Orthodox Life, No. 3,1991), according to the words of a member of the Theological Commission of the Moscow Patri­archate, V. V. Vaselik, served as the first warning signal for them of the union being prepared with the Monophysites. As a result there began a movement in the Moscow Patriarchate against the union.

Father Isaakii placed great value on the works of Father Seraphim Rose, and like him, also believed in the ideal of Holy Russia, expressed in the triune formula: “Orthodoxy, Autocracy, and Nationalism.” He fully understood the great significance of Russia in terms of her Orthodox mis­sion to humanity. Father Isaakii learned Russian and taught Greek in the Seminary in Russian.

In 1993 Father Isaakii traveled to Moscow. He returned with joyful memories of the people he met there.

He did not like to go to doctors, and when in the winter of 1996, it was discovered he had cancer, it was already too late to help. An operation relieved the immediate problem, but the doctor’s prognosis indicated a quick end.

A casket was already ready. Father Isaakii concentrated on prayer. He said: “Because of many cares there was no time to live in any great monas­tic concentration. Now the Lord has cut off all that is extraneous, leaving only the eternal.”

Months passed by and his strength seemed to return. He even returned to his obediences, but in the beginning of the summer the cancer again appeared. Now knowing the the end was near, and despite a sharp turn for the worse in his health, he continued to serve the brotherhood, striving to fulfill his monastic obediences. He was offered a more com­fortable cell in view of his condition, but he refused — a monk should repose in his own cell. There he reposed on August 10,1996 (n.s.)

His righteous life is witnessed to by the fact that his sister and nieces became Orthodox. His mother was baptized only 18 days after his repose.

It is truly a wonder that true Orthodoxy has been preserved in the Russian diaspora and now spreads throughout the whole world. To replace the old generation of monks in Jordanville who were tempered in Russia, a new generation arrives whose lives witness to the Catholicity of the true faith of Christ in which all are “.. .one in Christ Jesus.”

Abbreviated translation from Pravoslavnaia Rus, no. 18,1996 published in Orthodox Life no. 5, 1996