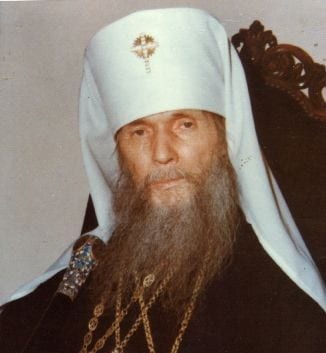 A translation of the full text of his letter was published exclusively in the UK in the December 1974 issue of The Old Calendarist. Now we publish (also for the first time in the U.K.) the reply of Metropolitan Philaret to Alexander I. Solzhenitsyn. It was translated from Russian for The Old Calendarist by Mrs N. McCurry.

On behalf of the All-Church Council of the Russian Orthodox Church Outside Russia I thank you for sharing your views and thoughts with us. We trembled for your life when you were arrested, but the Lord heard our prayers and you came out as if from the fiery furnace, and now can speak with us. The members of the Council listened to your letter with the greatest attention and found in it many deep and valuable thoughts.

It was rewarding for us to hear from you in person, as we have heard from other writers who have recently arrived, the confirmation of the essential justice of our attitude, towards Church events in our country. These have been reflected in our own Church life to a much greater extent than you can probably realize at present, without, that is, a deeper study of Russian Orthodoxy abroad during the last 54 years.

Nothing could be further from our minds than to pass judgment on anyone, but our hierarchy, being of the same flesh and blood as our people, was obliged to make decisions regarding the policies of Metropolitans Peter and Joseph and of Metropolitan Sergei. To follow the latter seemed to us not only particularly unwise abroad, not only generally mistaken in practice, but also incompatible with our very faith. Hence my predecessors in the leadership of our Church, who are now dead, the revered hierarchs Metropolitans Antony and Anastasy, after investigating deeply the question and consulting their consciences, came out against the policy of Metropolitan Sergei, which, as it developed further, led to the present stage in the interior collapse of the Moscow Patriarchate. From the year 1927 she several times demanded that we sign declarations of allegiance (here in exile) to the Soviet power. You have written correctly about the difficulties in explaining the policy of the leadership of the Western Exarchates of the Moscow jurisdiction. But it was exactly that which became the subject of our argument with Metropolitan Evlogy and his followers in 1927.

Archpriest George Grabbe, among others, made a fair remark in the Council concerning your letter, saying that, ‘What A,I. Solzhenitsyn does not realize is how many of our efforts from the ’20s until today have been directed to showing our separated brethren that the hierarchy of Sergei is not free, and that its policy has been both sinful and inexpedient. A.I. Solzhenitsyn writes with his characteristic warmth. But he has not yet heard of the writings of Metropolitan Evlogy’s supporters concerning the ‘sacred lie’ at the time they were supporting Metr. Sergei. Then they justified his position and accused us of being politicians.’ Metropolitan Evlogy and the others (in America) went to every possible length to ensure that the church abroad should not be one. For the sake of this Metropolitan Evlogy signed the Declaration of Allegiance to the Soviet power which was afterwards inevitably broken by them. Subsequently dismissed from office and banned by Metropolitan Sergei, he then went over to the Greek Church.

We can understand how such a Russian idealist as you must inevitably be horrified at finding the divisions of the Russian people in the West. We have all experienced this as a great grief. But unfortunately we have been forced, though unwillingly, to live with this situation. Metropolitan Antony found it especially hard: for Metropolitans Sergei and Evlogy were both in their times his most dearly loved pupils. His successor, Metr. Anastasy, a lover of peace by nature, made great efforts to unite all the Russians abroad. But the whole difference between us and those who are divided from us has been the very fact that we have wanted a united Russian Orthodox Church Abroad for the sake of the Russian people, while others have stood apart and interpreted our wish as empire-building.

To use your words one could say that my predecessors considered, as I do, that ‘there is no better way to serve Russia, than to preserve in Orthodoxy the treasury of unity, than to bring together the whole of Russian Orthodoxy abroad into one harmonious and friendly young Church.’ Because of this we have not accepted any offers to lighten our position by uniting with any other (non – Russian) church. Those of us in freedom have not wished to separate ourselves from the crosses of our persecuted brothers in the Fatherland, and not for anything will go back on our membership in the Russian Church. On the other hand, the Western Exarchate and the American Metropolia jurisdiction have divided themselves from her, the one by going over to the Greeks, and the other by declaring- herself autonomous and thus permanently separating herself from the Russian Church. These churches can no longer, either in official nomenclature or in reality, call themselves Russian. Only individual parishes still preserve their Russian character to some extent, and in America these are very few. One can say then for certain that if our church did not exist, there would be hardly anything Russian left in the West.

Not long ago, when the American Church declared herself autocephalous, we invited her to unity anew, but our invitation went unheeded. In spite of this, in painful consciousness of our lack of unity, our Council recently decided to approach our brothers with another invitation. And still we sincerely and warmly hope for unity, and are convinced that, with goodwill on their side, conditions of unity could be found, as they were in America in 1936.

Lack of concern for Russia and often a complete lack of understanding of the sufferings of the Russian church of course divide many people from us. But, thank God, we do not see in our parishes the kind of inhumanity that you describe. We do not know of one case of the refusal of Communion to a dying man (on jurisdictional grounds – O.C. Editor’s note). No one has ever opposed day-to-day relationships between priests, at any rate, on our side. However, when people cut themselves off from the Russian Church, feeling that they are now Americans, French or Greeks, then much that might have united us is certainly lost..

We can only put it down to misunderstanding or to someone who has misinformed you, that you express anxiety that we should count on returning to Russia in the capacity of judges or leaders. We know of no one in our ranks who has such thoughts. But if the liberation of Russia were to take place and unity with a restored Orthodox and canonical hierarchy were effectuated, then we would count ourselves part of the Russian hierarchy. What weight we would carry in these conditions we have not considered. The flock in exile is numerically a drop in the ocean compared with the whole Russian people.

You have touched on the question of the ‘underground church’. Our informants have provided us with indubitable evidence that even now there exist clergy who are not under the discipline of the Patriarchate. Of the existence even of bishops of this kind one person near to us has heard from a very well informed official in Russia who is not sympathetic to us. Perhaps you are not aware of this, because such churchmen would be reluctant to make contact with you since you were so much in the public eye and under constant observation. In any case there can only be very few of them. Knowing, however, how hard it is to oppose the organized power of communism, we welcome every sign of religious independence from Satanic persecution for the sake of Christ and, at the same time we receive all believing arrivals from Russia with love.

Your call to universal repentance is close to our hearts. But it seems to us that you lay too much emphasis on the persecution of the Old Believers. The Old Rite was allowed by the ordinances of 1798 and 1881 (concerning Dissent). The Old Believers themselves were divided into numerous sects (i.e. associations) which had often practically lost all signs of Orthodoxy. The persecutions of the Revolution, described in your books, cannot be compared with the persecutions of the 17th and 18th centuries. On the other hand, the Holy Gospel gives us the. words of the Lord Jesus Christ: “By their fruits ye shall know, them” and “Every tree is known by its fruits.” These comprise the eternal law of the spiritual life. The Russian Orthodox Church (of the ‘New Rite’) has in all periods of its existence, (including the time when it was separated from the Old Believers) given the world a mighty crowd of great saints and ascetics. But the Old Believers have not produced them, for sectarian pride, which has helped, the Old Believers to preserve their church life, has prevented the development of spirituality.

Did you know that the All-Church Council in Russia and the first All-Church Church Council Abroad approached the Old Believers with love? We do, however, truly share your feelings of anger at the historical sins of our people, which, taken all in all, led the nation to catastrophe. Fr. George Grabbe reminded us of the call to repentance of his great-grandfather, A.S. Khomiakov:

‘Do not say: The past, The old days, the sins of our fathers; But see that our young generation does not know the same old sins.’

When we were discussing help to the people of our country we did not think of this in terms of leadership, but in a much more modest form than it seems people have described to you. The Council considers it in terms of a witness to the West concerning the persecution of the faith in Russia and of the task of forwarding the Word of God and religious publications to our homeland. We have been encouraged by the response to what we have sent up to now.

In conclusion I once more thank you for your letter, for your sincerity and your Christian spirit which we greatly esteem. We know how valuable your time is, in which you to continue the sacred task you have begun of revealing the crimes of the anti-Christian power. We would be grateful in this respect if you were to include in your plans for your works the presentation of the deeds of the hosts of our confessors and martyrs for the faith in order to make them known both in Russia and in the West. The deeds and the blood of the martyrs constitute an indestructible and life-giving power.

On behalf of the Council I bless you and your family, and I remain your warm well-wisher.