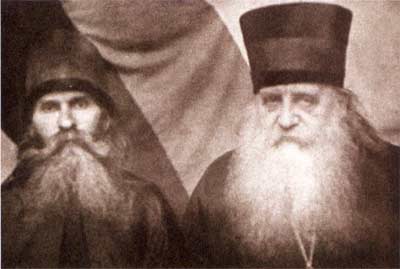 Russian Church Abroad has been for the long time fascinated with Old Believers.

Shared tribulation brings people together and impels us to forget mutual grievances and quarrels, bemoaning the common ruination and destruction of our Orthodox native land.

Besides previously experienced grievances, the Old Believers, separated from our orthodox Church, no longer retain grounds for separation from us, at least judging from the pre-1917 debates of Mr. Melnikov. At the time, he cited the not-quite canonical structure of the Russian Orthodox Church; but now a canonical structure has been restored and at Her head stands a lawful orthodox Patriarch of Moscow and all Russia.

Besides this, the necessity of lifting the curses of 1653 and 1667 was mentioned at those same debates; but this also with the help of God was arranged at the Moscow Church Council of 1917-1918. Regretfully I do not have its acts here but as the president of the Old Rite Commission, I recall that it was decided both to accept your bishops in their current rank and to establish among us five Old Rite bishops. The first of these was the Bishop of Okhta, His Grace Simon Shleyov, from the widowed archpriests, tonsured into monasticism, and tragically killed not long ago in martyric fashion by evildoers in Ufa.

Therefore, having heard of your goodwill, I would like now to learn what you think of union not with a dominant Church but with one persecuted by enemies of the Christian faith. Is it not time for us with one mouth and one heart to glorify the Triune God?