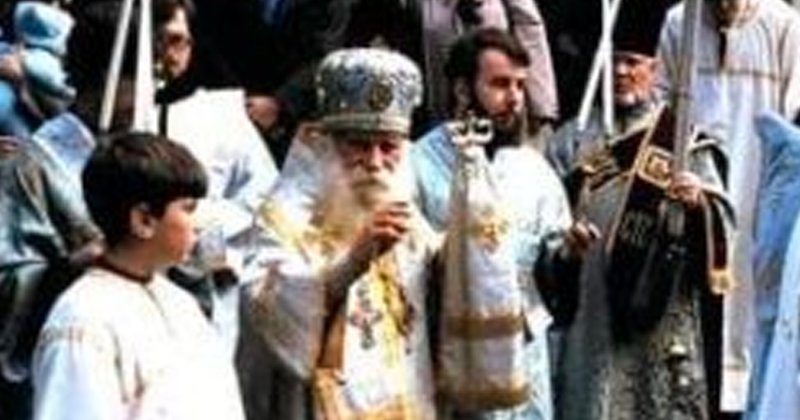 The former ROCOR bishop of Manhattan shares his memories about one of the representative hierarchs of the Russian Church Abroad.

Born into a priest’s family, he attended parochial school in Chernigov and helped his father in the parish administration. Then he attended seminary in Chernigov. He enrolled in Warsaw University in 1910. Continued his study of law at Kiev University, where he passed the exam in 1915. Volunteered for military service, took part in the Civil War, fighting for the White Army. 1918 he became acquainted with Metropolitan Antony (Khrapovitsky), with whom he worked most closely from 1922-3 6 in the emigration. After the death of Metropolitan Antony he studied theology in Belgrade and prepared to be a missionary. 1941 tonsured a monk, ordained to the priesthood and rector of Holy Trinity Church, Belgrade. Fled with the Synod in 1944 to Karlsbad and Munich. In Karlsbad he joined the Ladomirovo Saint Job Brotherhood. Elevated to igumen, exiled to Switzerland and secretary of the Synod. 1946 elevated to archimandrite, moved to Jordanville. Secretary to Archbishop Vitaly (Maximenko). 1948 Bishop of Florida, Vicar Bishop of Eastern America. 1959 archbishop, from 1967 Archbishop of Washington & Florida, member of the Synod. Died 4/1 7 Sept. 1976. The author of numerous writings and collaborator on variousnewspapers,including Military Herald (Voenny Vestnik) and Imperial Herald (Tsarsky Vestnik). His main work was the seventeen-volume edition of Zhizneopisanie Blazhenneishago Antonia, Mitropolita Kievskago i Galitskago (New York 1956- 69).

Your Grace, in our first interview with you we expressed our hope that at some point you would share with the readers of this Web site your recollections of “the old ROCOR.” From 1970 to 1976 you served as secretary and the cell attended of Archbishop Nikon (Rklitskii) of D.C. and Florida (d. 1976), and you were perhaps even the Archbishop’s confidant interlocutor. Therefore, we dedicate this interview to him.

Actually, I began my service with Vl. Nikon in June, 1971, until his repose on Sept. 4, 1976. Vladyka did not approve the use of the word “kelleinik” or cell-attendant: I was officially only his secretary, translator, subdeacon and, from 1973, his chauffeur.

Ever memorable Metropolitan Lavr held a high opinion of Bishop Nikon. I remember that the Metropolitan referred something to the effect of Vladyka Nikon’s honest and objective responses to his sometimes unamiable correspondents. Could you describe the Archbishop Nikon’s character?

Vladyka was extremely good and kind, gentle, but at the same time firm. I never saw him speak harshly to anyone during the years I was with him, but on occasion he became very tired of the “unamiable” people, as you put it, and when they were difficult, he could show how tired he was, not of the individuals, but of the nonsense they were speaking. He was truly a paternal and loving hierarch, and he made one feel very secure and positive about church life, despite the troubles that always plagued our Church.

Vladyka Nikon was very involved with the monarchist movement; he published Tsarskii Vestnik in Belgrade before World War Two. In America he was constantly attacked by Nikolai Chukhov, a rival monarchist publisher. I can easily picture Vladyka Nikon preaching to the ranks of Russian anticommunist troops during World War Two or giving a keynote address at a Russian monarchist convention, but was he able to reach other constituencies?

I believe the man’s name was Chukh-n-ov (and a literary caricature of him appeared in the English-language novel “Father Vikenty”, by Paul Chavchavadze).Yes, Vladyka was a convinced monarchist, but he was open to many different constituencies. For example, he welcomed American and other converts to our Church Abroad, and it was important to him that we had English-language services in the lower church at Synod. He had many influential American friends, some of whom, not being members, still made donations and helped support the Church Abroad. The Baroness Susanna Tenzer, for example, converted to Orthodoxy under his personal influence.

How was it possible that Bishop Nikon’s political activity did not interfere with his archpastoral duties?

Vladyka’s political activity consisted of a belief in Holy Russia, and in the future restoration of Orthodox life and polity there. But rather than bringing politics into the Church, he sought to make public, or political, life more Christian.

Could you tell us about Vladyka Nikon’s pastoral work work on behalf of those who came to the ROCOR from non-Orthodox confessions?

Vladyka always encouraged converts who came to our Church, not only Americans, but others as well: he received a Cuban mission in Miami that flourished for a time, and with his support, the English-language services at St. Vladimir Memorial Church in Jackson, NJ began and continue to this day. He was sympathetic to the various non-Russian dioceses that we used to have in ROCOR. For Vladyka, there could be many forms, traditions, languages in the Orthodox faith, but there was nothing for him outside of Orthodoxy.

I understand that in the mid-1960s the episcopate of the Russian Orthodox Church Outside of Russia was polarized, with “diplomats” pitted against “zealots.” Archbishop Nikon represented the former group and St. John of San Francisco the latter. Would you care to explain the role of Vladyka Nikon in that face-off?

I do not agree with that assessment. Both Vladyka Nikon and St. John of San Francisco had much the same world view. They differed only in their methods or means of achieving the goals both embraced. St. John was an ascetic and a mystic; Vladyka Nikon was kind and loving, and I would say, tried by gentle encouragement to lead people, be they Russian or not, to the One True Faith. Those who were sometimes called “zealots” in those days were a different group, and though they tried to lay claim to St. John of San Francisco, they themselves were often of a narrow, sectarian mentality, an outlook foreign to both St. John and to Archbishop Nikon.

Of course. Vladyka often told little incidents he remembered. For example, Metropolitan Anthony had not wanted to leave Russia when the White Army evacuated from the Crimea, but was tricked into boarding the ship to celebrate a moleben, and while he was aboard, the ship sailed.

Your time with Vladyka Nikon coincided with new trends within the ROCOR. What was Archbishop Nikon’s attitude regarding our resistance to “modernist” Orthodox jurisdiction?

Vladyka Nikon was not one of those who attacked other Orthodox jurisdictions. He privately told me that, while the old calendar is more correct, it was a mistake to break off communion with those who followed the new, and that we should have maintained ties with the official, or main, Greek Church rather than with the Old Calendarists. There were, he said, various calendars in the early Church, so the calendar issue was not one of “heresy”. Vladyka did not “resist” other Orthodox Churches, though he also did not make an issue of his feelings on the matter.

Is there anything else that you would care to tell us about Archbishop Nikon?

Perhaps that would be something for another interview.

Thank you, Vladyka, for sharing your valuable time with us today. We hope that in the next interview you will also share your thoughts on the present-day ROCOR.