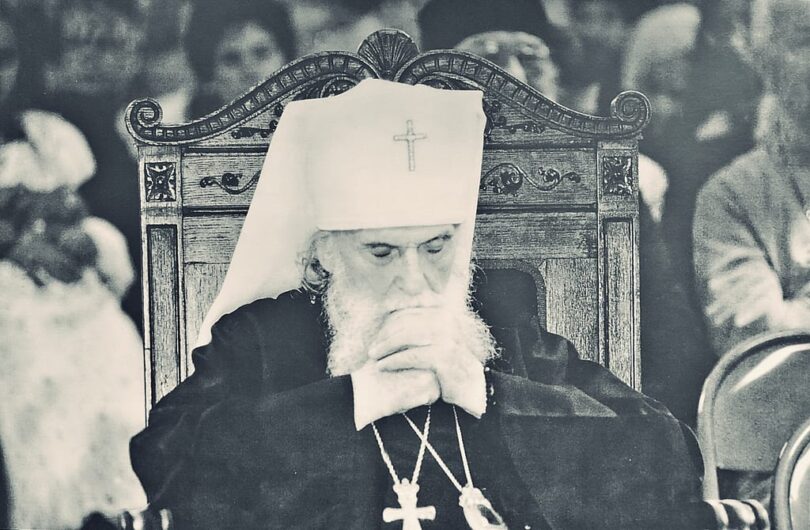 Metropolitan Vitaly offers criticism to America, England, and France among other western powers for their plan to provide financial aid to the Soviet Union.

From the very beginning of its existence, the Russian Orthodox Church Outside Russia appealed consecutively to foreign governments with a call to refrain from supporting the communist regime in Russia. The current unofficial call by the First Hierarch of the ROCOR is in line with the appeal of the First Pan-Diaspora Council to the international conference held in Genoa in 1922 and the North American hierarchs of the ROCOR to President Roosevelt, calling for refusal to endorse the lend-lease policy in 1941. The attitude of Russian Orthodox refugees toward the Bolshevik government, which had seized power in Russia by force, is understandable. However, such appeals illustrate simultaneously the depth of the psychological dissension between the Russian diaspora and the homeland. From Russia, the attitude to the question of confrontation with the Soviet government was perceived quite differently. Hence the words in Metropolitan Sergii’s Declaration (1927) that “Any blow aimed at the Union, be it war, boycott, any public adversity or indirect slaying as in the case of Warsaw, is perceived by us as a blow aimed at us.” Vladyka Vitaly stood out by his elegant literary style and love for imperial Russia and its culture, and this account should help us to understand our history better and not to assassinate his character.

Forgive me, fathers and brothers If, at first glance, you may think that I am engaging in something that is not my business. I would like to say a few words about the plan which the heads of seven Western countries want to implement, promising Russia or, as they say, the Soviet Union, many billions in aid –  many billions of valid American, English and French money: dollars, pounds, and other valid currencies.

Who will be the recipients of these funds? All the heads of state of these counties are fully aware and are under no misapprehension, having precise information from their embassies and consulates, that the “perestroika” in Russia extends only to the Communist Party. Admittedly, it did cast a faint shadow over all Russia in the sense that nobody was being executed for their faith, nobody was being imprisoned or sent to concentration camps for so-called religious propaganda. Yes, a small shadow indeed which benefited all Russia, but nothing changed in the main.

The official Communist Party was condemned, but it is all too clear that only the name was dropped, in reality it continues to exist. All those millions of communists did not vanish from the face of the earth or were swept away into a void, they continue to exist and stand at the helm of the entire state, in other words – the state is still being run by former communists, not under that name, but the same in substance.

This means that the Western funds shall be received by the very same communists, and what shall they do with them? Build new factories so that the people will have access to food and all commodities that are easily available here in the free world, and which are in such short supply in Russia? This is something they are unlikely to do, because the Russian people are not what the English language defines as “consumers” because they have no purchasing power.

The bulk of the Russian population lives in poverty. They pay with so-called “wooden” rubles, which are practically worthless. One ruble has less value than one cent. What does this mean? It means that the communist party shall use these American and other money to buy food from the West. By this, they shall enliven American industry, as the American government shall get all this money back, because all these commodities and grain, and butter and so forth cannot be purchased from anywhere but the West. It is possible that the Russian people will find life easier in the sense that they will be able to eat more or less normally for some years, but then everything will revert to the past.  Nothing will change because there are two factors, which the communists running the country will never agree to alter. The first is that they will never agree to private property in the genuine sense of the word, and the second is that they will never allow the ruble to become a genuine globally-valid currency. That would be like death to them and to communism as such. There are numerous examples of this. In Barnaul, Russian people planted some wheat on a small allotment. When the wheat ripened, the communist party burned this wheat down to the ground. One woman in Sevastopol set up a cooperative, but the financial authorities made her life such a misery that she gave up and closed her venture.

They shall never permit private property because this would lead to their political demise.

Consequently, I would like to ask the seven heads of state the following question: what are you doing by giving billions in valid currency to Russia? You will feed the country for some time, and then everything will revert to the former status. Everything will be consumed, but as there is no genuine private property nor any real cultivation of millions of acres of Russian soil, it will be just as before.  There will be hunger again, and a hand will be extended to you for more aid, while the communists will be building up their military power with the use of such aid.  That military power will be directed against both the West and the Russian people in the form of internal military units, the KGB, and the police. And what will be the result?! No, governments of free countries, you need to issue an ultimatum to the Soviet Union – to pass a law regarding private property, its inviolability, and the mandatory transformation of the ruble into a valid convertible currency. The basements of the KGB are full of tonnes of gold and this measure could be implemented easily, but they will never agree to do so. They will continue to print billions of “wooden” rubles making it possible for people to buy bread, potatoes, and rotten cabbage, to pay rent for their all-too-often miserable dwellings and travel cheaply around the country. But who will travel all over Russia when the Russian people are poverty-stricken? This is what upholds the ruble inside the country: bread issued with food stamps, potatoes, half-rotted cabbage and cheap accommodation. That is what a Russian receives for his “wooden” ruble. Despite this, a real ruble will never exist if the government is not faced with an ultimatum.

You may ask me: “What business is this of yours, a metropolitan? You should pray to God and concern yourself with saving souls.” Yes, but the head of the Church has obligated to concern himself not just with the salvation of souls, but also the conditions in which these souls exist. But he should also think in terms of the state, and if there is any injustice of local or global scope, the head of the Church has no right to remain silent.