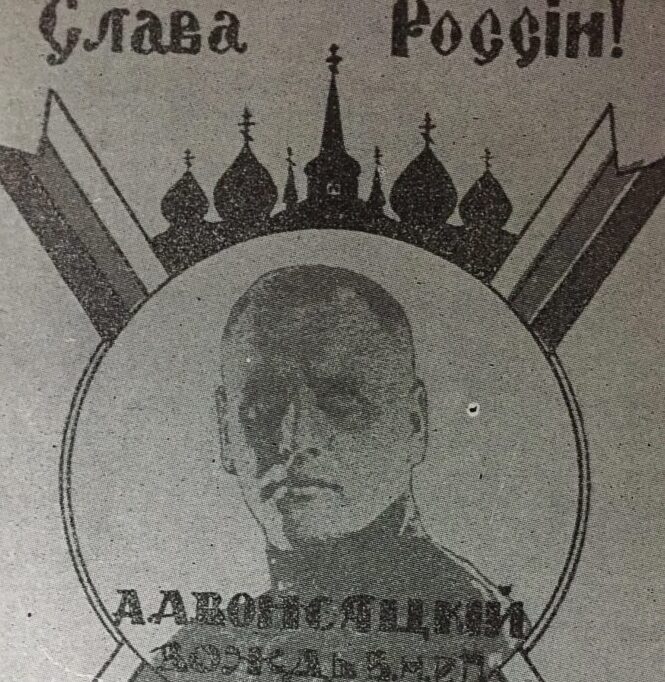 From the brochure: Criminal activities of a Russian bishop in America

The All-Russian Council of 1917-1918 declined to endorse any set of political views for the church as a whole. In his appeal to the Russian Church on Sep. 28/October 8 of 1919 Patriarch Tikhon emphasized that “the Church associates Herself with no political system.”  This approach was not acceptable to a large number of Russian church emigres who had endured the terrors of the civil war and the loss of their homeland. The First-hierarch of ROCOR, Metropolitan Antony (Khrapovitsky) of Kiev and Galich sincerely believed that monarchism was not a political course, since monarchy was “the only power structure under which the church would not be persecuted” (“Церковность или политика?” Деяния Русского всезаграничного церковного собора. Sremsky Karlovci, 1922, p. 125). These views were expressed in a resolution of the first All-Diaspora Council, held in Serbia in 1921, which called for the restoration of the Russian monarchy. This approach ignored the necessity of completing the work of the All-Russian Constituent Assembly, dispersed by the Bolsheviks on January 6, 1918. Precisely this referendum was intended to fix the will of Russians regarding the political makeup of their country.

Based on his efforts to reestablish an Orthodox monarchy or national state in Russia, Vladyka Antony supported anyone who could help make his dream a reality. This included the efforts of such people as the Leader of the National Revolutionary Party (NRP) Anastassy Andreyevich Vonsyatsky, who used his wealthy status to offer material assistance to Russian church emigres. Although the NRP did not hold antisemitism as a tenet of their program, the supplement Nash Put’ [Our Path] to issue number 419 of the Tsarsky Vestnik, using the slogan “God, Nation, Labor” was completely in line with other materials sympathetic to Nazi Germany that were published by the editor of Tsarsky Vestnik Nikolai Pavlovich Rklitsky. In fact, Nash Put’ was a paper published by another Russian fascist Konstantin Rodzaevsky in Manchuria.  It was in this supplement that the address of Metropolitan Antony that we share with you is found. As we learn from the pamphlet published by Vonsyatsky in America this was already the second blessing of Metropolitan Anthony of NRP (Преступная деятельность русского епископа в Америке). These blessing became a reflection of Metropolitan Anthony’s support of the armed struggle against the Bolshevik regime in Russia. It remains to be studied to what extent such blessings were used by the OGPU and NKVD in the fabrication of accusations against churchmen during Stalin’s purges of the 1930s.

It must be said that the views of Metropolitan Antony and his friend N.P. Rklitsky were extremely common in church circles in Yugoslavia. For example, the Serbian Patriarch Varnava, at a reception in the Russian colony in Belgrade during the 1936 Bishop’s Council noted in addressing Metropolitan Anastassy, “I am sure that all will be well in Russia again, in a tsarist Russia. Before I was alone, but now another helper has appeared – Hitler.” (Bp. Makary Il’insky, “Архиепископы бриллиантовых крестов не приняли” [The archbishops did not accept diamond crosses]). Therefore the ROCOR deserves credit for distancing itself from Fascist ideology at the Second Pan-Diaspora Council of 1938.

Many Russian political refugees, not only in Yugoslavia, associated their hopes of recovering their homeland with the rise of the right-wing nationalist movements in Europe and Asia. Thus the sympathies of the Russian emigration to Nazi Germany, which had declared a crusade against communism, and which supported the ROCOR as the official Orthodox Church of the Third Reich, led to a denial of Nazis’ realpolitik and attraction to conspiracy theories, which were clearly expressed in the propaganda brochure, На закате жидовской силы (At the twilight of Jewish Power), written by count Yuri Pavlovich Grabbe in 1943.

I was very happy to have a visit from our indefatigable patriot Anastassy Andreyevich Vonsyatsky. I listened with great interest to him telling how patriotism is growing among the Russian youth, and that by their labors, in D.V., a place dear to my heart, they have founded an excellent Russian organization of fascists, chosen A.A. Vonsyatsky as their leader, and joined with other brave young patriots in various countries where Russian people find themselves.

I should say of all of you the words of the apostle Paul: “ye are bought with a price” (I Cor. 6:20), since in Russia patriotism has been completely extinguished, and only by the harsh punishments of the Merciful Lord it is now returning to our homeland. Guard the valuable sprouts of Russian patriotism, and give no place to despair in all of the difficulties and sorrows that surely await you.

A great country such as Russia cannot be reborn and set straight without faith in God and His Holy Church, without unanimity among the people, and without a strong organization of those ready to serve their homeland with self-sacrifice.

Moses in ancient times took the census of his people before leading them into the promised land, and “set over them capable God-fearing people, righteous people that hated self-interest,” and chose them “as leaders of thousands, hundreds, fifties, and tens” (Ex. 18:21) to give his people the law and strictly see to its fulfillment. In the same way, our pious ancestors, inspired by the Holy Bible, set up the Muscovite Kingdom in the 16th century, choosing the best people, taking care for the simple people, and forming the sort of national organizations that modern European governments are only starting to imagine. The great names of Makarii the metropolitan of Moscow and his glorious fellow-laborers archpriest Sylvester and the boyar Adashev should be honored as the founders of Russian national fascism.

In any case, for your work to succeed, you must always have unshakable faith in the Lord God and His Holy Church, so that without the confusion so typical of Russian people, you would be obedient to your Leader, that you would have a unified plan of action, and that you would be filled with genuine brotherly love to one another.

My heart was warmed, seeing with what resolve, practical clarity, lack of fanaticism, but genuine enthusiasm your Leader has taken action, and after we parted ways after our warm conversation, I prayed, asking the Lord God that He would fulfill the desires of my beloved guest’s heart, and that He would help, protect, and strengthen the Russian Cause.

My heart rejoices especially that you have made it a priority to look after the lesser brethren — the peasants and working people, and I hope that this does not lead to the usual demagoguery, but that you would truly enjoy the love and trust of your people. Then you will be indefatigable.

May our true leader, the Lord Jesus Christ send to you and your project His all-powerful aid.