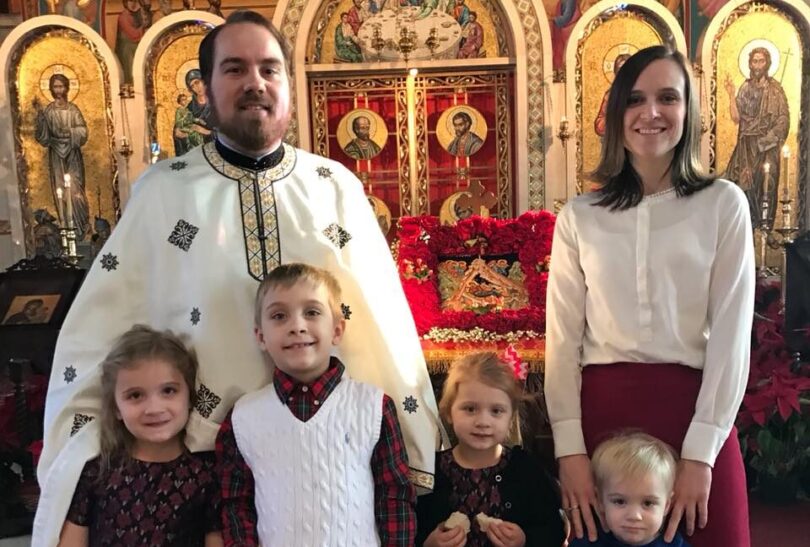 Father Nicholas with his family. 2018

Reader Nikolaj Kostur is the son of Archpriest Fr. Lazar Kostur of the New Gracanica-Midwestern American Diocese of the Serbian Orthodox Church. Nikolaj is a graduate of both Holy Trinity Orthodox Seminary (Jordanville, NY) and St. Vladimir’s Orthodox Theological Seminary (Crestwood, NY). In this interview Nikolaj tells us about his research on the relations between the Serbian Orthodox Church and the Russian Church Abroad and of the American Metropolia with the latter.On photo: N. Kostur with H.E. Metropolitan Jonah after receiving Master in Theology degree. St. Vladimir’s Seminary, May 2009.

Please tell us about your background.
As a child of a Serbian Orthodox Priest, I grew up in a very traditional home. My parents would always take us to every church service, where we would serve in the altar or sing on the kliros. Growing up, I was always told about Jordanville and the Russian Orthodox Church Abroad (ROCA), its connection with the Serbian Orthodox Church (SOC), and how it formed my father. As a child, I never seriously considered going to seminary until I was about 16 years old, at which time I made the decision to enter Holy Trinity Seminary upon my completion of High School, hoping to follow in my father’s footsteps.

I believe that the study I completed at HTS included quite a bit of new materials, having researched in the Archives of the Serbian Orthodox Patriarchate during the summer of 2004. Some of the most interesting documents was the correspondence between Patriarch Varnava and Metropolitan Sergius (Starogordsky) and between Metropolitan Anthony (Khrapovitsky) and the former. For example, Metropolitan Anthony wrote to Patriarch Varnava, stating that he would never believe that Metropolitan Sergius wrote the declaration of loyalty to the Soviets according to his own desires, but rather that he was forced to do so by the Soviets. I also acquired sources from the Archives of the ROCA Synod in New York and the Federal Archive of the Russian Federation (GARF).

What stereotypes challenged your thesis?

At the time I was writing my thesis in Jordanville, the talk of unity between the MP and ROCA was intensifying, with different positions. Some students and members of ROCA supported unification, while a large group was against the process. It seems that many people believed that the early years of ROCA’s existence was of an anti-MP character, or that the SOC solely supported the MP. However, one can see through the publications of ROCA, namely Tserkovnyia Vedomosti and Tserkovnaya Zhizn’ (Church Life), that this was not the case. First, Metropolitans Anthony and Anastasy (Gribanovsky) along with the Synod of Bishops of ROCA never came out with any declaration contradicting the validity of the MP. Secondly, one can see that the SOC remained in good standing with both the MP and ROCA. In fact, there were times when the SOC more so supported the MP, even though ROCA existed in Serbia and functioned with the blessing of the SOC. Of course, the utmost respect was shown to the hierarchs of ROCA, but as a “Semi-Autonomous” Church, as Patriarch Varnava referred to it in 1935. The MP, however, was still respected as a Sister Autocephalous Church, and the SOC did not want to break that sisterly connection.

You wrote your thesis for your Master’s Degree in Theology at St. Vladimir’ Seminary on the Relationship of ROCA to the Russian Orthodox Church in North America (i.e., the OCA) from 1920-1970. I understand that the previous works that dealt with this issue were of polemical matter. Your thesis is the first work that analyzes the topic clinically. What did you learn while studing the subject?

Unfortunately, in both the OCA and ROCA there are stereotypes and misconceptions regarding one another. Human weaknesses, passions and gossip played a large role in allowing for these stereotypes. Members of both churches seem to have a lack of knowledge of their own history. For example, members of ROCA do not know or acknowledge that the OCA was an autonomous body within ROCA from 1935-1946, along with three other autonomous churches: ROCA in the Near East, Far East and Western Europe. Likewise, members of the OCA do not realize that their church was in fact a part of ROCA, in complete submission to the Council of Bishop of ROCA. In general, I learned that both churches are very similar. They have a common root, and that is the Church of Russian pre-1917, especially the influence of Patriarch Tikhon. Both churches have similar practices and divided over differences due to a lack of a common leader. The divisions were perpetuated due to a lack of communication and open-mindedness. Both churches committed offenses against one another, whether by accepting clerics from one another without canonical releases, criticizing one another without proper knowledge of the situation and remaining isolated from one another, especially after 1970, when the OCA was granted Autocephaly from the MP. Having looked at the differences and reasons for division, it was apparent to me after my research that both ROCA and the OCA must take steps for better relations and work together, founding their cooperation on their common roots and common goals, ultimately the salvation of souls in the bosom of the Orthodox Church.

It is often to encounter the opinion that from 1935 to 1946 the North American Metropolia (ROCNA) was subordinated to the ROCA Council of Bishops, and therefore having ceased the communion with the ROCA in 1946 she caused a schism. What is your opinion?

I believe that the actions of ROCNA at that time did indeed cause a division, although I would rather not use the word schism. Based on the Charter signed in Sremski Karlovtsy in 1935, ROCNA was an autonomous Metropolitan Region of ROCA which was in submission to the Council of Bishops of ROCA. In fact, hierarchs of ROCNA were not given awards, like being elevated to Archbishop, had the Synod of Bishops of ROCA not approved it first. Such was the case for Metropolitan Leonty (Turkevich) regarding his elevation to Archbishop from Bishop. After WWII, American morale was at a high, and until the Berlin Airlift, the Soviets were looked at as Allies of the United States, which caused many in ROCNA to believe that the Church was free in Russia. Unfortunately, ROCNA did not seek the approval of ROCA to leave. It is important to mention, however, that ROCNA did not want to break connection with ROCA, but rather wanted to be directly under the omophorion of the MP. It would have been better for ROCNA to have asked for a blessing to do this from the Council of Bishops of ROCA. It would have allowed sometime to examine the situation more closely and realize that the MP was not going to accept ROCNA on its desired terms, but rather that it would put ROCNA into submission to ROCA. Within a few months, the MP rejected ROCNA and it was left by itself, not attached to any other Church and quite isolated.

You grew up within the Serbian Orthodox Church, graduated from Holy Trinity Seminary and now completed your studies at St. Vladimir’s Seminary. How did this diverse experience enrich you?

It gave me a feel for life outside the SOC, in an Autonomous Church and in an Autocephalous Church, allowing me to see how both operate. It was a good experience learning about the traditions and customs of both churches, as well as prepared me for scholarly study. My time at HTS, particularly my thesis research, prepared me for the work I undertook at SVOTS, by examining archival materials and making use of the extensive library resources at HTS. This opened the door for the more serious research that I was able to do at SVOTS. I am greatful to both institutions for the tools that they have given me for my life, not only as, God-willing, a future server of the Church, but also as a researcher and historian.

We greet you on your marriage this past July. What is next? Any history projects?

I am currently the Librarian at the Joe Buley Memorial Library located at New Gracanica Monastery in Third Lake, Illinois. I would like to continue my research in Church History and I am hoping to examine the Schism of the SOC in North America from 1963-1992.

It is great to know that all your projects have practical implications for the Church. Thank you for taking the time to give us this interview, and I hope that we will learn from your future studies a great deal on the history of the Russian Church Abroad.