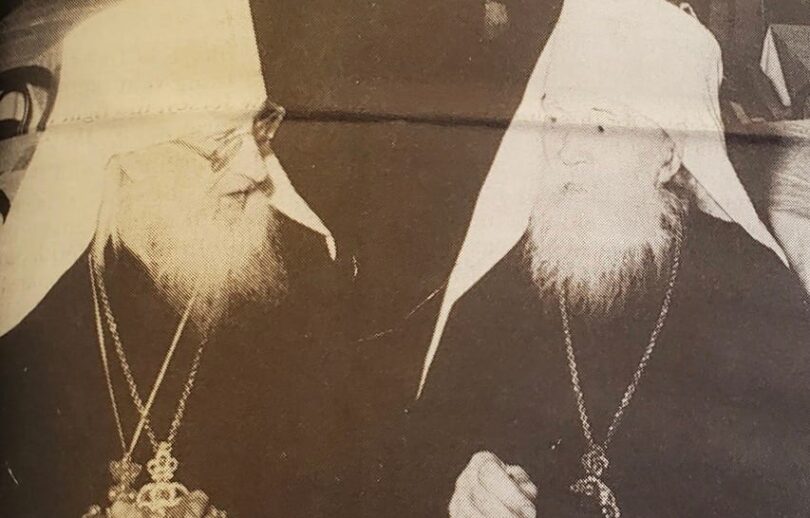 On points of separation between two churches.

The current document has been circulated as the leaflet:“A Necessary Clarification From the Chancellery of the Synod of Bishops of the Russian Orthodox Church Outside of Russia”. 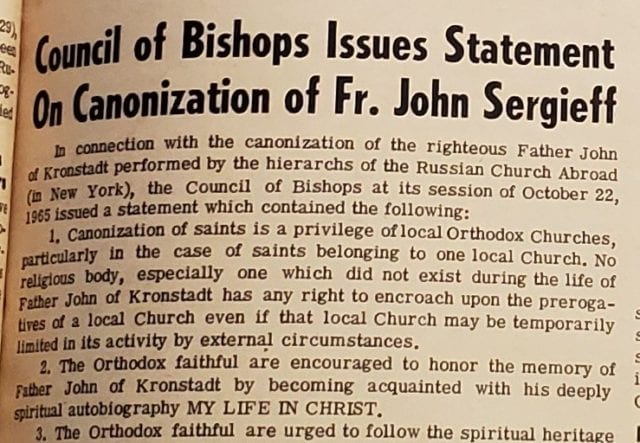 From the official organ The Orthodox Church, 1965

Due to the campaign that has been initiated by certain newspapers against the Synod of Bishops and the silence of the latter, several public figures have turned to His Eminence Metropolitan Philaret, the President of the Synod, asking for guidance in the form of an authoritative clarification.

The Metropolitan has clarified, first and foremost, that the Synod of Bishops has not responded publicly to any of the attacks in the press because it considers it in principle inappropriate to engage in polemical discussions with individuals in newspapers. In addition, the Synod did not want to subject the actions of the late Metropolitan Leonty to any criticism, whereas this would have been inevitable had it responded to the statements in the newspapers.

Certain Russian newspapers have recently become too unceremonious in their manner of writing about hierarchs, clergymen, and the Church. People often do not bother to familiarize themselves with the Holy Canons, while citing the same in their statements with great aplomb. They do not refrain from outright fabrications, either. We see this, for example, in claims about a penalty allegedly opposed on a certain “Father Mitrophan” for serving a memorial service for Metropolitan Leonty. First, such memorial services have never been forbidden by anyone and priests who have celebrated them have not been subjected to any disciplinary measures by the church authorities. Second, the only Father Mitrophan who took part in services for the repose of Metropolitan Anastassy does not fit other aspects of the description in this letter and on his part strongly refutes any references to himself in this connection as well as his having had any conversation with Professor Iriston, whom he does not know. He wrote about this in Novoe Russkoe Slovo.

Coming to the essence of the matter, the Metropolitan explained to his interlocutors that when the American Metropolia was under the leadership of Vladyka Leonty, its course diverged significantly from that of the Synod of Bishops. Despite Metropolitan Anastassy’s attempts to establish some kind of modus vivendi with it shortly after his arrival in the United States, the actions of the Metropolia served to alienate it ever more from the Russian Church Abroad, a process that reached its culmination in a proclamation signed by Metropolitan Leonty against the canonization of Saint John of Kronstadt, which had met with such enthusiasm not only among the Russian Orthodox faithful, but also among representatives of other Local Orthodox Churches. This is a very serious impediment to liturgical concelebration by the Church Abroad and the American Metropolia. It is worth noting that Metropolitan Anastassy had hoped that the Metropolia would join in the glorification of Saint John and that this would serve as a starting point for a continued rapprochement, yet Metropolitan Leonty’s proclamation disappointed these hopes and served only to deepen the split even further.

Initially, the main point of difference between the Church Abroad and the Metropolia was in their relation to Moscow. As is well known, under Metropolitan Theophilus, a North American Metropolitan District was established as a part of the Church Abroad. In accordance with Metropoltan Theophilus’ conception, Vladyka Leonty was elevated to the rank of archbishop by the Synod of Bishops while the latter was still based in Munich. The relationship between the Synod and the Metropolia could not have been better, up until the Council of Cleveland, which took place shortly after the end of World War II in 1946. At this Council, Patriarch Alexis was recognized as the lawful Patriarch of Moscow and it was resolved to break off relations with the Synod in order to rejoin the Moscow Patriarchate. It was this resolution that caused the split, since a number of bishops and parishes did not agree with it and remained in the Synodal jurisdiction. It goes without saying that Metropolitan Theophilus and his associates soon realized that it would be impossible to reach an agreement with Moscow. They did not rejoin the Moscow Patriarchate, but their recognition of Patriarch Alexis as the lawful Patriarch—with which the Church Abroad cannot possibly agree—remained in effect, and they likewise did not reunite with the Synod. While we do not sanction even any informal interaction with the Soviet clergy—among whom there are certainly agents in cassocks—the members of the American Metropolia have received Moscow hierarchs and even permitted one of them to serve a memorial service at Metropolitan Leonty’s grave. In knowledge of this, the Synod of Bishops was not able to send its own representative, lest an undesired encounter should take place. Indeed, a member of the Bulgarian hierarchy, which is cut of the same cloth as that of Moscow, took part in Metropolitan Leonty’s funeral.

In the mean time, the Church Abroad will continue to follow His Beatitude Metropolitan Leonty’s testament, which concludes with the following words: “As far as the Moscow Patriarchate and her hierarchs are concerned, inasmuch as they are caught up in a close, active, and amicable alliance with the Soviet regime, which openly confesses its total atheism and seeks to inculcate atheism in all Russian people, the Church Abroad, in order to preserve its purity, cannot have any canonical, prayerful, or even mere informal interaction with them, while leaving the final judgment of each of them individually to a Council of the future free Russian Church.” After this, the Synod of Bishops, with Metropolitan Anastassy presiding, resolved to cease all concelebration with the Metropolia.

The rift between the American Metropolia and the Church Abroad has been further deepened by the fact that it has willingly and systematically received clergymen who were suspended for canonical infractions, and this despite Metropolitan Anastassy’s protests. Metropolitan Leonty replied to him that his church was a “sanctuary” for such persons. Yet while other services apart from the Liturgy (prayer and memorial services) were occasionally celebrated conjointly, this ceased to be possible after the Metropolia consecrated Archimandrite Mikhail Dikii—who had been suspended by the Synod and put on trial before a Court Spiritual for preaching heresy and on moral charges—as bishop. He did not wish to answer for these charges, which were confirmed by witnesses and clergy all around, but instead went over to Metropolitan Leonty’s jurisdiction and was later consecrated as bishop. The Holy Canons invoke strict penalties in such cases upon both the ordinand and those who ordained him. Furthermore, this was but the crowning act of several that were intended to carry over the divisions in North America to other countries that had never belonged to the American Metropolia.

Under the conditions outlined above, the Synod of Bishops did not find it possible to react officially to the death of Metropolitan Leonty. While not celebrating any official memorial services, the Synod of Bishops nevertheless did not forbid any of its spiritual children to pray for the repose of his soul, which is the prayerful wish of each of us for him.

The Synod of Bishops, for its part, would be glad not only to have liturgical concelebration with the American Metropolia restored, but also to see it return to full unity with the Russian Church Abroad on the unshakeable foundation of the Holy Canons, which have binding force for the entire Orthodox Church. Only the American Metropolia itself can foster the right conditions to change the situation for the better by removing all the current impediments to such an improvement.