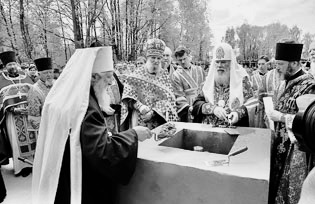 Patriarch Alexis and Metropolitan Lavr laying a cornerstone for the church of new martyrs built at the shooting grounds in Butovo. Source: mospat.ru

Prior to his first official visit to Russia, in 2004, Metropolitan Lavr explains his vision of the relationship between the church in homeland and diaspora.

Our conversation was taking place in January of 2004, three years before the historic reunification of the Russian Church Abroad and the Moscow Patriarchate in 2007. Not knowing how to pose the following complex question I try to find the words

I read a month ago that your future meeting with Patriarch Alexii is in the works. Please tell me, Metropolitan Lavr, has it taken place yet?

─ Oh… with Alexii. No, not yet. It hasn’t happened yet. Perhaps it will at some point. But we don’t know that yet.

It’s interesting that as he says this, Vladyka Lavr rubs his hands, as if he’s about to work on something. Then the cameraman takes a close-up of Vladyka Lavr’s face. The Metropolitan listens to my lengthy question attentively, occasionally gently nodding his head.

Of course, the subject of the reunification of churches, of the strength of Orthodoxy in Russia, is something which not just I am talking about but the old timers, as I call them kindly and lovingly, whom I am shooting for my film ─ Fyodorov, Novosiltsev, and others. Each of them has his own viewpoint, but they are all guided by a boundless love for Russia, patriotism, incredible and very sincere pain for our country, in spite of everything that they underwent. But there are many things that are still not being touched upon in that tragic period of Russian history and that emigration, that Orthodox flock, which you now lead abroad. Will certain moral, ethical, and historical issues be brought up in this conversation with Patriarch Alexii, or do you feel that it is not the clergy’s business to pose such questions?

─ Well, I think issues will be touched upon more in purely canonical areas and areas of church history. But I doubt that there will be any special mention of ethical areas. These issues are a matter of history, depending on how one sheds light upon them, how they are approached. One person might understand and see something one way while another might respond and bring up other motives and bases for the same items.

A large number of kids from the former Soviet Union are now studying at your seminary.

── Well, we do have young people there, sure.

I understand that this is a large subject and can’t be discussed in a word or two, but does it seem to you that the reunification of the Russian Orthodox Church is being anticipated?

And here… many old people are anticipating this.

On what basis do you think this is possible?

─ Well, I feel this should be gradual. With God’s help, in the first place. This can be arranged gradually, but not so simply, of course. This will require a bit of time. It won’t be a matter of having a sudden meeting, signing, discussing, and concluding.  It won’t work that way, of course. This is a matter requiring much time and discussion of many ongoing issues and the differences we have regarding these issues.

What are the main issues?

─ There are issues of a purely historical or canonical nature.

And what about the notorious “Sergianism”?

─ That, too. That’s from one aspect, and so-called “ecumenism,” concelebration with the heterodox, is from the other. That’s an issue that requires discussion. There will be two committees for this, one from our side and the other from the Moscow Patriarchate’s side. Issues that are ongoing and need to be sorted out and discussed will be introduced to the committees and discussed by them, and then each committee will make recommendations to its side. And later the top church leadership will have to decide, discuss, and take measures and further action.

Now some are expressing this apprehension, even those who are welcoming reunification.  They’re saying that thanks to the Orthodox Church Abroad so many valuable holy objects and archives have been preserved that there’s a fear that reunification will allow access to all these objects which have always been secure here, and suddenly this door will be opened and who knows what might happen later ─ taking into account that now everything is going well in Russia, but later… Why, you know how easily Cossack memorabilia, and not just that, gets sold.  And so there’s this apprehension.

Vladyka Lavr understands my question as soon as I start speaking and replies quickly, preventing me from finishing my lengthy explanations.

Here, for the first time in this hour and a half of our conversation about complicated historical subjects, Vladyka Lavr’s voice became noticeably firmer and louder when he started speaking of the future of the Church Abroad. After a brief pause he added:

─ We’re thinking of coexisting peacefully, to live in peace as we lived, and to continue our life and so on. As much as possible we wish to cooperate with the ecclesiastical and spiritual life there, in Russia, and to make use likewise of testimonies from that side of what Russia has. Russia, too, has its spiritual treasures.

What main benefit will the Orthodox in Russia and the Russians here receive from administrative unification? As I understand it, the institutions will have their independence anyway ─ hearing the word “independence” Vladyka Lavr lowers his head approvingly ─ What will the Orthodox get in return?

At this point Vladyka Lavr’s response indicates that he is a product of the Pochaev Brotherhood of St. Job, whose mission for many centuries had always been education. His response demonstrates his knowledge of and love for the printed word and book publishing, and that he welcomes the opportunity to expand the educational work of the monastery and the entire Russian Orthodox Church Abroad.

─ In the first place the Orthodox abroad will have the opportunity to acquaint themselves with the many historical treasures which exist in Russia. There are a lot of documents and archives there to which we haven’t had access before. Much is being published, and the opportunity is growing to take advantage of this. And there will be more opportunity to make use of our archives, stories, works, and books over there in Russia.

And now let me conclude not with a question but with a request.  Could you simply say a few words? Imagine that an audience of young people is before you in Russia who are currently being fed various slogans regarding what it means to be Russian, to be a patriot… Could you somehow formulate what you would wish for them, so that the nation might have a future? What, in your view, is most important?

Vladyka Lavr smiles benignly to my, I dare suppose, unflagging enthusiasm. The discussion is in its second hour, and here I am, asking him a “philosophical” question.

─ I think that we should keep in mind what my mentor, the late Vladyka Vitalii, about whom I had told you, had in mind when he was restoring the monastery in the Carpathian Mountains and headed our monastery here.  What is most important is keeping the behests of our founders, of Russia’s founders, of St. Vladimir, which are to preserve Orthodoxy and to live according to the truth, to God’s commandments. That is what’s most important. Then we can count upon God’s help, upon God’s witness, upon being respected, and upon being able to bring benefit not only to ourselves, but to the whole world as well.

Thank you very much!

─ God be with you!

─ The best to you…

I give Vladyka papers about my film “Born Russian.” He listens to my explanations attentively. I stand next to him while the cameraman prepares to turn the camera off, and the magic of this moment is about to end, to be brought to a halt on the film… But time will solicitously preserve all of the subsequent encounters to befall me during these Christmas days… Overall, we have used up over a hundred hours of film, there will be so much on it, but basically, this is material that we’re filming here for Russia because many people don’t know that so much good is being done here for Russia. The majority of people remain ignorant. I’m incredibly grateful to everyone. A blessed feast to you! Get some rest! Vladyka Lavr smiles at my chaotic explanations, and I do a prostration before him. “Well, God be with you!” he says, blessing me once more, and I press myself to his hand for the last time in my life… the microphone cord falls off his cassock and he jokes: “Watch it, I’ll carry your gadget away! And here I am, wondering, what’s pulling on me?” At that point the monastery brethren, who were getting tired of waiting for the end of the discussion that had dragged on, accompany Vladyka Lavr out of the print shop, where our discussion had taken place, while at the door, awaiting the continuation of the filming was the unusual monastery old-timer, Lev Ivanovich Pavlinets or simply Lyovushka, who was somewhat touched and always ready for a discussion, who had known Vladyka Lavr and the Pochaev Brotherhood of Ladomirova from the earliest years of its existence… “Christmas with Vladyka Lavr ─ I could only have dreamt of such an interview. This dream was fulfilled on the day of Christ’s Nativity on January 7, 2004, and this discussion will become, God grant, the inheritance of many generations of Orthodox Christians. These are priceless reminiscences of historical events from the mouth of a rare person who was able, through God’s will and patient prayer to unite Russian believers after eighty years of onerous forced separation. How few are those in history who instead of taking along others and leading them away unite them into one. With all the significance of his rank and the role allotted him in the history of the Russian Orthodox Church, Metropolitan Lavr was simple and kind in his interactions and always attentive and sincere. That’s how remember him in my heart. That’s how he was captured, God grant, by my video camera, bestowing almost two hours of unforgettable reminiscences of this great, humble, and wise man, who was NOT OF THIS WORLD!