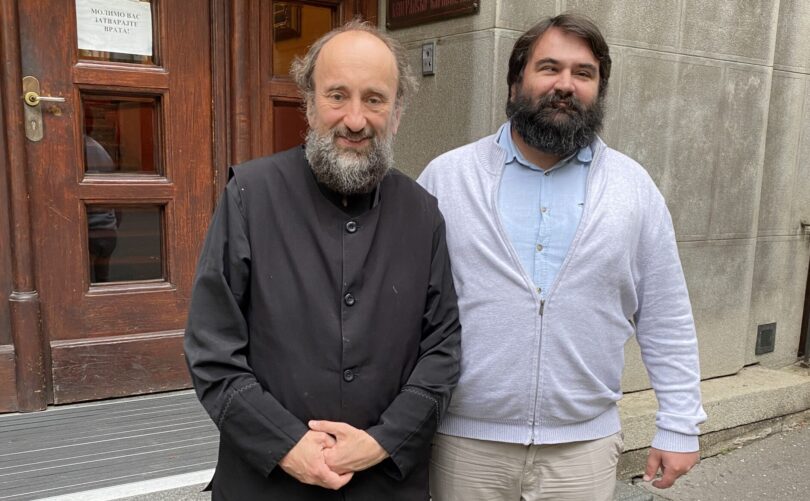 Conference's organizers Dr Radovan Pilipović, Director of the Archive of the SOC and Deacon A.Psarev at the SOC headquoters

A field trip to organize a conference this November marking the 100th anniversary of the decision of the SOC to provide canonical foundation to Russian refugee bishops.

With the blessing of the Synod of the Serbian Orthodox Church and ROCOR First Hierarch, Metropolitan Hilarion, Belgrade will be hosting the conference “Links Between Times: Conclusions and Perspectives. On the Occasion of the Centennial of the Russian Church Abroad” from November 23–26, 2021. The conference is being organized by the Archives of the Serbian Orthodox Church and the Historical Studies of the Russian Church Abroad Internet hub founded by myself. 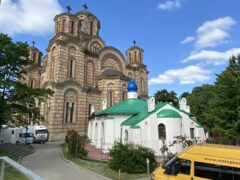 I traveled to Belgrade on May 30, 2021, in order to make preparations for the conference. The next day, the Sunday of the Paralytic, I had the privilege of serving in the Russian Holy Trinity Church, located in Tašmajdan Park, in the shadow of the enormous Serbian Saint Mark’s Church. It was a great joy to see that the church has retained its original “refugee” interior. By contrast, a few years ago, it was a pity to see that the original brown-wood iconostasis in the Russian metochion in Bari, Italy, had been lost during a major renovation. The difference between the communist regimes in the USSR and Yugoslavia can be seen in the fact that, after all these years, there is still an icon of Saint Alexander Nevsky with an inscription in memory of Alexander Kolchak, Commander-in-Chief of the White Russian Forces. General Peter von Wrangel’s tomb is still there, too.

Location of Kursk-Root Icon; “Kolchak’s icon” is behind and to the left

The church is a metochion of the Moscow Patriarchate. Archpriest Vitalii Tarasʹiev, who serves here, comes from the third generation of a family of ‘Russian Levites’: his father and grandfather were priests in the same church. Here, Fr. Vitalii and his Serbian assistant priest Jovan continue the old tradition of the Russian cathedral church, holding services almost every day. The parish has a mixed Serbian and Russian congregation, and almost all of those who were at the service received communion. 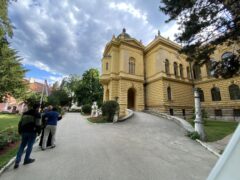 Patriarchal palace in Karlovci,  where Met. Antonii Khrapovitsii had his headquarters

On May 31, I met with Radovan Pilipović, the Director of the Archives of the Serbian Orthodox Church (SOC). The next day, Dr. Pilipović invited me to visit Sremski Karlovci, where Metropolitan Antony (Khrapovitskii) had his residence in the Patriarchal Palace from 1921 until his death in 1936. We were warmly welcomed by Bishop Vasilije of Srem, who for over 40 years has the head of this large diocese of the SOC with over 300 parishes. Bishop Vasilije gave his blessing for the second day of the conference to be held in Sremski Karlovci. During the period when the people of Serbia were divided, Sremski Karlovci, in the territory of the Austro-Hungarian Empire, was a center of learning. The town center, church, and seminary building bear the marks of the Austro-Hungarian period. Time seems to have stood still there. Yet the young teachers we met were educated in Moscow and Saint Petersburg and showed the high level of sophistication of today’s young scholars. 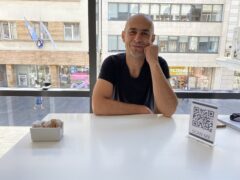 On Wednesday, June 2, I met with Srećko Petrović, a doctoral student at the Theological Faculty of the University of Belgrade and managing editor of the Serbian-language journal Teološki pogledi (Theological Views) of the Serbian Orthodox Church and Editor-in-Chief of his own English-language journal Nicholai Studies on the heritage of Saint Nikolaj Velmirović, Bishop of Žiča. At our conference, Mr. Petrović will present a paper on “Churchmen of the Russian Orthodox Church Abroad in the Life and Work of Bishop Nikolaj Velmirović”. He also kindly agreed to work with us in organizing the conference.

This building hosting the Archive of the SOC used to be home to the Theological Department of Belgrade University, where St. John of Shanghai, Fr. George Grabbe, and others studied

We were in constant contact with hoteliers over the course of the week. As a result, we were able to decide on accommodation for the conference guests and on a conference hall. The hotel will be situated in the center of Belgrade.

During my week in Belgrade, I enjoyed getting to know this wonderful country, and my stay

His H.Patriarch Porfirije visiting the office of the SOC in Zemun

was colored by the brotherly hospitality of my Serbian counterpart Dr. Pilipović. It was a pleasure to begin to become acquainted with the Orthodox Serbian people and to learn about how the SOC supports its scholars. During my visit, Patriarch Porfirije of Serbia, who was elected in February of this year, visited the Archives and expressed his support for Dr. Pilipović’s work.

I thank our Lord Jesus Christ that the trip was so productive. My thanks also to all our donors for their support in organizing the conference. Special thanks go to the ROCOR Diocese of Australia and New Zealand the Patriarch Tikhon Russian American Music Institute (PatRAM). A detailed conference program will be presented by the end of June on the basis of the information gathered.