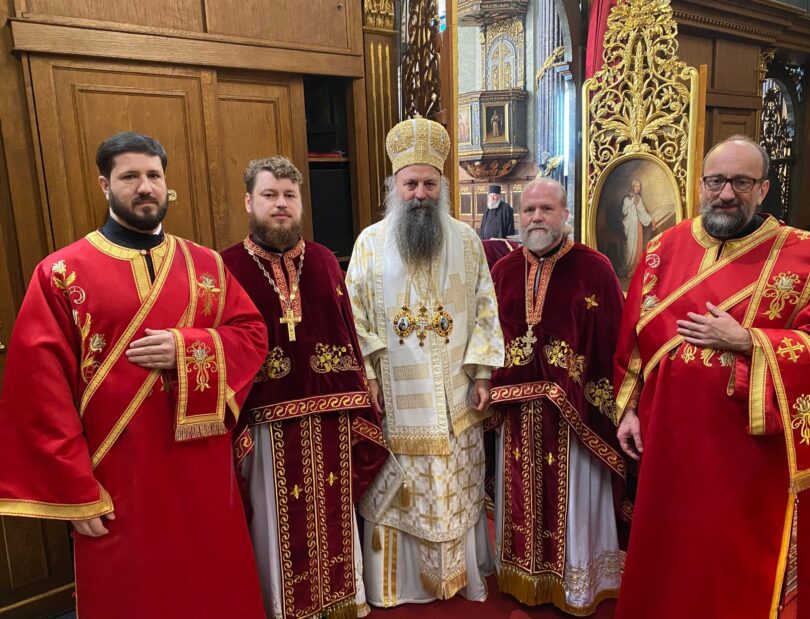 The weekend in Belgrade leading up to the conference has been extraordinary so far. Fr. Andrei has been here since Friday, and a few of us arrived early on Saturday from various countries (America, Germany, Russia, Slovakia), and it is hard to believe that we have already spent a full twenty-four hours together: the time has, to use a cliché, quite simply flown by. On Saturday evening, after everyone was checked into the hotel, we went to dinner at Šešir moj, the restaurant that is booked for the final reception on Thursday evening, with generous support from the Pastoral School of the Diocese of Chicago and Mid-America. We all ordered different dishes and, fortunately, were all pleased with what we got. They even had some quite decent vegetarian options, contrary to Serbia’s reputation for having a heavily meat-based cuisine. This morning (Sunday), we met in the hotel lobby at 7:45 and set off for a Sunday liturgy. We were invited to the slava – the patronal feast – of Saint Michael’s Cathedral opposite the Serbian Patriarchate. There were quite a number of Serbian parishioners having their slava breads blessed before the service, with the singing of the usual troparia Sviatii muchenitsy…, Slava tebe Khriste Bozhe…, Isaie likuj…. After the liturgy, we were invited to a reception with Patriarch Porfirije, where we were served a beautiful and unbelievably generous lunch. Toward the end, Fr. Gregory Joyce addressed the Patriarch and voiced his gratitude for Serbia’s generosity to the Russian refugees as well as the importance of the ROCOR’s historical ties to Serbia. An unexpected highlight was a tour of the nearby premises of the Pevačko društvo, an esteemed musical society that has existed without interruption since Serbia’s liberation from the Ottoman yoke. It was their talented choir that had sung much the ordinary of the Divine Liturgy in the morning, as well as some pieces at the reception with the Patriarch. Over coffee, we swapped stories and discovered unexpected mutual friendships and personal connections. Tomorrow, most of the foreign delegations (from Kiev, Moscow, etc.) are meant to arrive in the afternoon and it is like to be a day of setup, errands, and picking guests up at the airport. But more on that later.