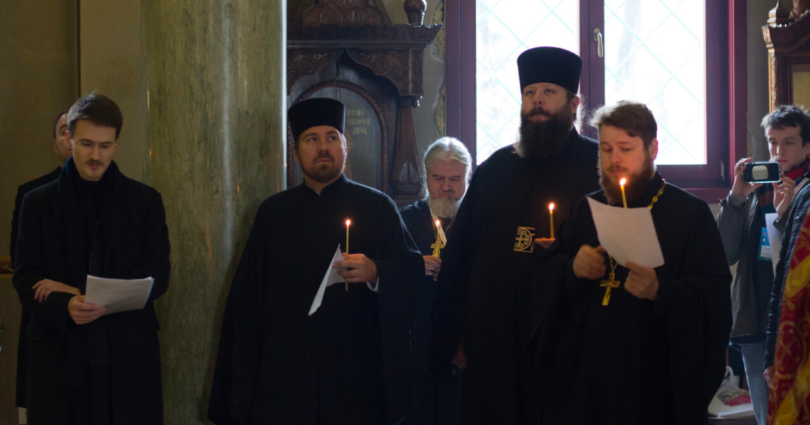 It would be fair to consider the first conference day a success. We began with breakfast at Hotel Envoy and then made our way via bus to Holy Trinity Russian Church, built here by White Russian émigrés, where a memorial service was served for Metropolitan Anthony (Khrapovitskii) and other reposed ROCOR hierarchs, clergy, and laity. After this, we got on the bus again and traveled to Hotel Envoy’s impressive conference center on Gospodar Jevremova Street for the beginning of the first session. After resolving some – perhaps inevitable – minor technical difficulties with the Zoom meeting, things got off to a flying start.

The first talk, by Andrei Popov, provided valuable data on archival collections that are of relevance for historians of the Russian Church Abroad. The next two talks both dealt, directly or indirectly, with the issue of the influence of political forces on the ROCOR – whether viewed through the lens of Metropolitan Antony’s ministry as Metropolitan of Kiev (Vladimir Bureha), or the Council in the South of Russia (Iulia Biriukova). The ensuing discussions about, on the one hand, Metropolitan Antony’s title of “Metropolitan and Kiev and Galicia”, and on the other, Metropolitan Evlogii’s status as Exarch, were particularly fruitful and in themselves valuable contributions to the academic study of these issues, in that they clearly identified potential avenues for further research (including in the archives mentioned by Dr. Popov). Last but not least, Archpriest Dimitrii Olikhov shared his findings concerning a lesser-known gathering of bishops in Tomsk, Siberia, that served as a precedent for the All-Diaspora Council, among others.

The second session addressed the history of the ROCOR during the Second World War. By this point in the conference, the technical difficulties were mostly resolved and it was reasonably smooth sailing. Mikhail Shkarovskii provided valuable insights on the ROCOR’s interactions with the regimes of various Axis countries and on the historical diversity of opinion within the Church Abroad about the Nazi regime (in contrast with prior simplistic representations of this issue), whereas Ivan Petrov shed light on contacts between the ROCOR and clergy and hierarchs in the Soviet Union. After these two talks, we broke up for a very civilized lunch served right there in the conference center. The third session comprised two talks (by Frs. Aleksandr Zadornov and Jovan Marjanac) on the thought of the famous émigré canonist Prof. Sergii V. Troitskii, which again gave rise to highly insightful and fruitful discussions. One issue that was the subject of particularly extensive deliberation on the part of the speakers and audience members alike was the contrast between Prof. Troitskii’s earlier and later writings, in terms of both tone and content, and whether it is possible to reconcile these two periods in his thought. This led further to profound deliberations on the nature of the academic study of canon law and its significance for the life of the Church. Lastly, Svetlana Bakonina presented on another arguably less well-known yet profoundly important episode in the history of the Russian Church in exile, namely, attempts to create an autonomous Ecclesiastical District in the Russian Far East. According to her eloquent and consummately illustrated talk, as of 1922, the Far East could well have become a second Karlovci, but historical developments and the surrender of the Priamur proto-state to the Red Army curtailed these efforts before they could come to fruition.

The day was concluded with overarching remarks by Metropolitan Mark who commented on how the church was not prepared for changes and the beginning of the twentieth century and warned us to learn a lesson from it.