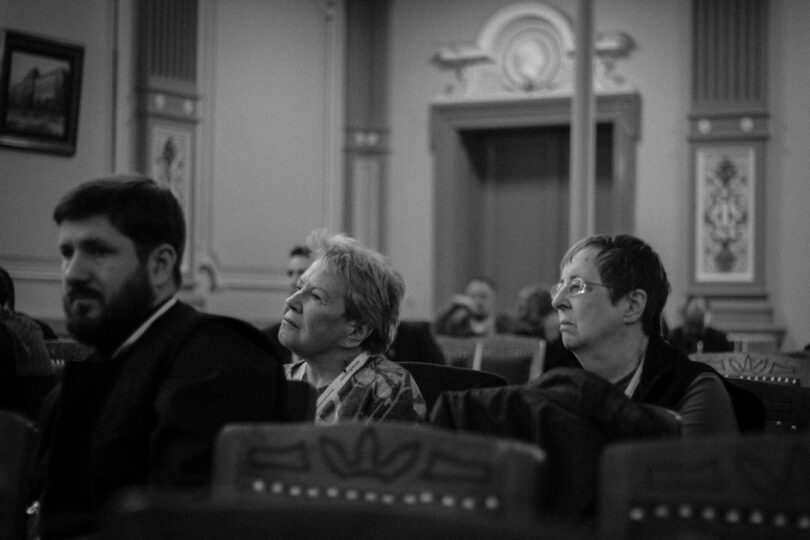 This day got off to a rather different start than the previous one, in that, after rising and having breakfast the hotel, we immediately set out for Sremski Karlovci. After a bus ride of no more than an hour and a half, we were already in the beautiful small town of Karlovci. The town, located in former Austro-Hungarian territory, is known for being a center of émigré and Church life closely tied to the history of the Russian Church Abroad.

The events in Karlovci began with a tour of some of the main sites and ecclesiastical institutions in the central area around the seminary. It began with a visit to Saint Nicholas Church, followed by an icon gallery, which had six rooms with permanent exhibitions of icons in various styles, printed liturgical books, altar crosses, vestments, and even traditional ceramic stoves. Next, there was a group photo session with Metropolitan Mark and the local bishop, Vasilije (Bishop of Srem), visiting the location of the Russian church and the appart. This was followed by a walk to the house where Baron Wrangel had his apartment in Karlovci – unfortunately very poorly maintained. On the way, some of the group also visited another small but very beautiful church dedicated to Ss. Peter and Paul.

The first conference session of the day began on time at noon. The first presentation of the day, by Fr. Nemanja Mrdjenovic, was richly illustrated and elaborated on the vital role of the Serbian church in the early stages of the ROCOR in Australia. Srećko Petrović, one of the organizers, gave a survey of the ties between ROCOR hierarchs and Saint Nicholai Velimirović, on whom he is an expert. In a different vein, Iurii Danylets of Uzhgorod University gave a fascinating account of contacts between the Orthodox movement in Subcarpthian Ruthenia and the Church Abroad, as well as the Serbian Orthodox Church.

Throughout the day, we enjoyed generous hospitality from our hosts at Karlovci Seminary. At no point was this more palpable than during lunch, which was a veritable feast served downstairs in the seminary refectory. As we were going back to the conference hall, the seminary choir greeted us at the entrance by intoning a polychronion to Metropolitan Mark.

The first speaker after lunch was by Dr. Radovan Pilipović of the Archives of the Serbian Orthodox Church, one of the co-organizers of the conference. His talk provided, among other things, impressively detailed statistics about Russian parishes and clergymen in Serbia between the wars. Viktor Kosik, meanwhile, followed with a paper about the lives of individual eminent Russian émigrés in Serbia, which revealed much about the attitudes prevalent in the Russian diaspora at the time. Alexey Timofeev of Belgrade University continued along somewhat similar lines, discussing the fates of Russian parishes and individual émigré figures after World War II. Due to unfavorable shifts in Yugoslav policy, most Russians either chose to leave the country or were expelled, and many of them met tragic fates in the Soviet Union.

Afterward, in the evening, Serhii Shumylo of the Institute of the Athonite Legacy in Ukraine presented two new books, one about the New Martyrs of Russia (whom the ROCOR was first to canonize) and another about Elder Avvakkum Vakarkov of Mount Athos, a disciple of Venerable Alexis Kabaliuk of Subcarpathia, who featured prominently in Iurii Danylets’ talk. Dr. Shumylo donated copies of both books to the organizers and to the library of the seminary in Karlovci. The long, but thrilling day wrapped up with a showing of the film “His Excellency Baron Wrangel”, in Serbian with Russian subtitles, by Director Boško Milosavljević. It was excellently narrated and edited, and it was impressive how many interviews he ha managed to gather from descendants of Russian émigrés still living in Serbia. After this, it was back to the hotel for dinner and a well-deserved night’s sleep.