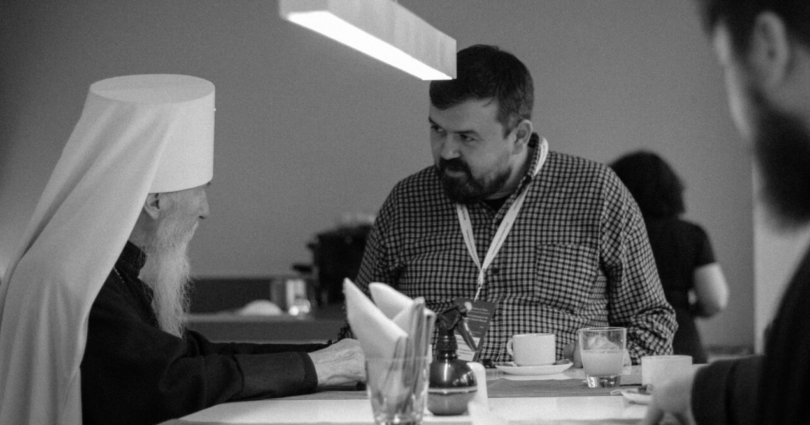 The final day of the conference (Thursday) was graced by a number of excellent talks. From the start, the logistics were much more straightforward, thanks to our being back at the Envoy Hotel’s own excellently-equipped conference facilities in Belgrade. We made our way down there after breakfast at about 9.30 am. The first session kicked off at 10 am with a remote talk by Andrei Slesarev about two Belarusian hierarchs, Archbishops Filofei Narko and Afanasii Martas, who for a time entertained the idea of establishing a Belarusian church body either in the ROCOR or under Constantinople. Notably, during the question round, Metropolitan Mark shared his personal recollections about Abp. Afanasii, calling him “indecisive” – which fit with the picture of him sketched by the talk. Next, Andrei Kostriukov raised the important question of why the ROCOR often faced conflicts with laymen and lay organizations, as in the famous court case against Saint John of Shanghai and his supporters in the San Francisco parish. The morning’s events wrapped up with a thoroughly researched talk from Serhii Shumylo about the history of contacts between the ROCOR and the so-called ‘Catacomb Church’ in the (former) USSR. This sparked a lively discussion, during which Metropolitan Mark reflected on the ROCOR Synod’s role in supporting underground Orthodox movements in the Soviet Union.

The early afternoon session before lunch was about the ROCOR’s relationship with the Metropolia viz. OCA: Fr. Nikolaj Kostur covered the early period (interwar and wartime), while Alexis Liberovsky, the OCA’s lead archivist, struck an especially open and conciliatory note in his richly illustrated and sourced talk by emphasizing the cordial relations between Metropolitans Anastasy and Leonty, the important 2010 Joint Statement between the ROCOR and the OCA, as well as the fact that the OCA, for its part, had never formally broken off communion with the ROCOR.

As on Tuesday, lunch was served right there in the conference hall, and it was again quite good. Afterwards, we made our way downstairs and settled in for the final afternoon session, which brought the conference to a very strong conclusion. Deacon Paul Siewers of Bucknell University shared his penetrating and highly moving observations about the culture of American converts to Orthodoxy Deacon Vitaly Permiakov considered the question of whether the ROCOR had a distinct liturgical culture. After pointing out a number of distinctive features in service books published in the ROCOR, he went on to give a detailed, impartial history of the revival of the Liturgy of Saint James in the Church Abroad. Last, but certainly not least, conference organizer Deacon Andrei Psarev delivered his own paper. Bringing together insights from a number of other talks (especially those from the first day of the conference), he traced the development of conciliar forms of governance in the Church Abroad from the All-Russian Local Council of 1917–1918 to the present day. His final conclusions focused on perspectives for the ROCOR’s future: he made the case that the ROCOR could benefit from having a body of experts analogous to the Inter-conciliar Assembly in the Moscow Patriarchate, and also that we must do our best to make sure that there is always a place for conciliar work in the life of the Church Abroad, calling it the ‘liturgy after the liturgy. As on both of the previous days, Metropolitan Mark delivered a closing address that brought together some of the key ideas from the day’s talks. He praised the conference very highly and voiced hopes that historical research on the ROCOR would continue in this vein going forward. This concluded the academic portion of the conference.

However, the day’s events were not yet over. At 8.00 pm, we gathered in the lobby of the hotel and then set out for a meal at Šešir moj, at which Metropolitan Mark shared some stories about Saint John of Shanghai and San Francisco. The meal was splendid and the Pastoral School of the ROCOR Diocese of Chicago and Mid-America very generously took care of the bill. Although the festivities in the restaurant continued well past midnight, many of us left earlier in order to pack our bags and be up in time to attend a liturgy the following morning at the Convent of the Entry into the Temple of the Mother of God in the neighborhood of Senjak, about 20 minutes from the hotel by taxi. After a service prayerfully sung in the monastery church by the Abbess and one of the sisters, we had a very pleasant reception with Metropolitan Mark. Soon after the reception ended, Patriarch Porfirije arrived in the convent to meet with Metropolitan Mark. Afterward, a number of our party returned to the hotel or set out on walking to the Iveron Chapel at “New cemetery”, while those who stayed behind enjoyed a surprise visit by Patriarch Porfirije, who wished to see Vladyka Mark before the latter flew out in the afternoon.

This was effectively the end of the formal conference program – four days of memorable talks, engaging discussions, and heart-warming encounters among all those present. Apart from the obvious academic benefit of sharing research on the ROCOR’s history, many new friendships and professional connections were made. Moreover, the fact that members of not only the ROCOR, but also the OCA and the Serbian Orthodox Church were present, was a powerful demonstration of the unity that has now, by the grace of God, been achieved among the various branches of the Russian Church, as well as of the deep spiritual ties between the Russian and Serbian people.